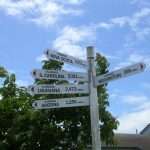 Stories from United States dominated the news stories in the past week; the loss of life in events elsewhere in the world might have been greater, but the US was familiar, it was like home. Even in childhood years, America was familiar.

At primary school there was a puzzle, where Tennessee was the best piece in the jigsaw; much more interesting than the great bulk of Texas or the curve of Florida. The jigsaw must have covered only the lower 48 states, or maybe it was so old that it pre-dated the time when Alaska and Hawaii joined the Union. In the memory, there was a jigsaw piece for each state, but maybe some of the New England states were combined, otherwise Rhode Island and Maine would have been very quickly lost by primary school children passing wet dinner times in a tiny rural school.

The cities had a poetry of their own. They were the places from the series on our black and white television; thousands of miles apart, they became an amalgam called “America” in our minds. In fact, America had no television existence outside of the cities. Rural life was an undiscovered country; the only time anything not urban appeared was in cowboy films, and they were very predictable. Rural life could have been presented in any way that anyone wanted and, we would have been none the wiser

The television images were reinforced by the songs. Americans sang about where they lived; these were not just folk songs, not just pub songs, these were major hits. Massachusetts, California, New York, West Virginia – place after place took on a romantic hue, even Wichita in Kansas.

Glen Campbell made Wichita a magical place. Where else in the world would the maintenance of cables inspire a song that makes the list of the best pop songs of all time?

What chance would there be of someone singing about driving around Co Offaly for the Electricity Supply Board having a hit?

Places in Ireland just don’t have that same resonance. If songs are sung about Irish towns or cities, they are about those places in the past – Molly Malone, The Rare Auld Times, On Raglan Road – and they always include one or more theme from love, death, drink, and the land.

In England, perhaps there is even less association between places and hit songs – anyone ever heard a song about Birmingham? A BBC report once featured a singer who was singing about Northampton, arguing that if American singers could sing about places like Galveston, then why couldn’t English singers write songs about their own towns and cities? The song was not a success.