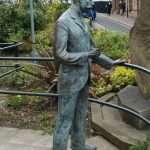 The sun shone and the temperature reached twenty degrees and the English shires assumed their customary beauty and Saint George’s Day was a good day, a fine day, an excellent day to be in England.

‘Cry God for England, Harry and Saint George!’ wrote Shakespeare in Henry V. Of course, God must have been on the side of the English, didn’t they win? But one wonders how seriously William Shakespeare took such lines, did he really think God was an Englishman? Probably not, this is the same writer who introduces humour into the tragedy of Hamlet with the dialogue of the between the clown-gravedigger and Hamlet, who the gravedigger thinks has gone to England.

How did the Scots feel about God supporting the massacre of highlanders at Culloden Moor in 1746? How did the Irish feel about an English government that presided over the Great Famine of 1745-1752? How many of those people would have cried, ‘God for England, Harry and Saint George?’

I love Elgar and Vaughan Williams and all the composers that get a run out on 23rd April; I enjoy Shakespeare (well, most of it, anyway), but let’s enjoy Saint George’s Day and leave God out of things.