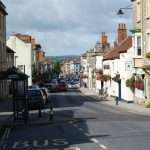 He seemed to need to make a statement. Someone had mocked him for being suburban, from Camberley or some such place, and he had assumed it to be an implication that he had come from somewhere that was not significant. At that time, at the end of the 1970s, one of the punk bands had recorded a song called ‘The Sound of the Suburbs’. The song was a caricature of suburban life, but he had used it as inspiration to compile a list of all the bands at that time which came from the London suburbs. He had written, ‘The Sound of the Suburbs’ across the top of a piece of paper, and below the title had written the names of each of the suburban bands, and had then stuck the piece of paper to the wall of his room.

It was an odd statement to make: who was worried about from where he had come? Who would be impressed by a handwritten list of pop groups of which most people had not even heard?

In those days before the advent of multi-channel television, and long before the arrival of the internet, it was possible for people or places famous in their own locality to be completely unknown in the neighbouring county, even fashions moved from city to city gradually rather than there being uniform shifts across the country.

But did it matter whether one came from a place regarded as significant? Growing up in the land of Arthur and Alfred, there was always the sense of coming from somewhere special, but special to whom? There were few people from outside Somerset who regarded it as a significant place (and many more who regarded it as a place of rustic yokels!).

If people did not think our place as somewhere important, as somewhere from which kudos might be derived, then we had little regard for other places. Just because somewhere had been the site of historical events, or the birthplace of major historical figures, or was the home of people whose pictures might fill the pages of the newspapers, did not mean it was any better than our place.

There were moments when conversations seemed at the level of sticking lists of pop bands on a bedroom wall; attempts to assert the importance of one’s own place, demonstrating a need to make a statement.

Living now in the Irish Midlands, few people have heard of Alfred or Arthur, or all the other stuff that was important in those teenage years, and even fewer care. Decades past, much youthful angst may have been avoided if there had been an awareness that it did not matter from where one came, what mattered was the person one was – a reality that writing lists of names could do nothing to change.