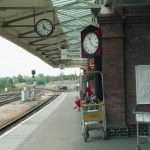 Our daughter has her final exam tomorrow.  Two years of studying medicine at Trinity College, Dublin now complete; an occasion for reflection, recollection.

Catching the District Line train from Kew Gardens to Waterloo, carrying a case that could only be moved in fifty yard bursts, the weight of books being so heavy.  The tube train defying the label ‘underground’ as it made its way through the scenery of west London, only dropping just below street level as it approached the centre, like an uncertain swimmer not wanting to get out of their depth; being overtaken by the speeding trains from the Piccadilly line which did not hesitate to dive deep into tunnels.

Buying a single ticket for Yeovil Junction and lugging the case into a compartment of one of the old Southern Region carriages that were still pulled up and down the line to Exeter.  There was poetry in the list of stations called out by the British Rail station announcer: the next train from Platform 10 will be the 1435 for Exeter Saint Davids, calling at Basingstoke, Andover, Salisbury, Gillingham, Sherborne, Yeovil Junction, Crewkerne, Axminster, Honiton, Exeter Central and Exeter Saint Davids.  A man walked the length of the train, swinging closed the carriage doors, each resounding thud bringing nearer the moment of departure. A shrill whistle and then we pulled out, heading south through Clapham.

The compartment was empty except for myself; I leaned against the glass and watched the grey suburbs which were followed by the greenness of English shires on a June afternoon.

The train pulled into Yeovil Junction at twenty to five; opening the door meant sliding down the window and leaning out to turn the handle.  My Dad stood waiting on the platform and moved to help with the weight of the suitcase.  We walked up the stairs and over the bridge to reach the car park.

Having dropped out of college after two terms, and having returned twelve months later to complete first year, it seemed like the end of a very long journey.

I never really re-engaged with the London School of Economics, where I was a student.  It was as though the year apart had opened a chasm between us.  I went on to complete the second and third years in a desultory fashion, turning up for lectures, completing essays on time, getting sufficient marks to pass the exams.  I made no friends in the seven terms after returning and never set foot in the place after leaving in 1983.  Passing down the Aldwych in a cab years later, a friend looked left into Houghton Street and said, ‘There’s the LSE, Ian. Didn’t you go there?’

Yet the memories of that June afternoon are fresh, even the taste of the tea at the house of my grandmother where we called on the way home.