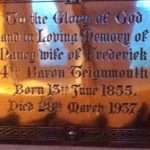 Sitting in a church beside the River Nore in a village where the soft landscape of Co Kilkenny merges into that of Co Wexford, a moment’s inattention meant catching sight of a shining brass plaque on the nave’s north wall. ‘Nancy, Wife of Frederick, 4th Baron Teignmouth’.

‘Teignmouth’ it seemed not to be a grand title, more the stuff of station announcements as we waited for the train to return to school, hearts heavy at the prospect of a new term. An express might reach its terminus, Plymouth or Penzance, in a handful of stops, a stopping train might halt at rather more; Tiverton Parkway, Exeter St Davids, Exeter St Thomas, Starcross, Dawlish Warren, Dawlish, Teignmouth, Newton Abbot, Totnes, Ivybridge, Plymouth.

There was a pattern, but no apparent logic, in the stations used by the school. Exeter Saint David’s at the start of the term, Teignmouth at the end of term, Newton Abbot for boys returning home for the two weekends permitted each term. Exeter acquired an association with gloom; Teignmouth, an association with a buoyant delight.

Teignmouth was the location of our sister school. While, for the good of our health, boys travelled deep into Dartmoor to a sprawling grey building where condensation would freeze on the inside of the windows on winter nights and where the nearest shop was three miles distant, girls enjoyed a relatively liberal regime in a fine house above the seaside town. Fraternisation was permitted occasionally, teenage romances blossomed briefly, sometimes friendships that would last for decades. Teignmouth meant girls in the height of 1970s fashion and pop records and smiles and laughter.

In student days, Teignmouth was a place to reach by train. Not so much to be there, but to make the journey down the Exe estuary and along the South Devon Coast. Starcross and Dawlish Warren will ever be evocative of light on water and the warmth of long days. In stormy times, the railway might be inundated, but in those years the sun seemed never to be absent. Once, a friend and I journeyed down for no reason other than the journey; we ate lunch in a pub in Dawlish and played frisbee on the beach before returning to the mundane meadows of Somerset

The first Baron Teignmouth took his title from his wife’s home town; did his successors often visit the place after which they were named? Perhaps the fourth baron and his wife enjoyed journeying to the ancestral place. Perhaps later barons travelled the line down from Exeter, staring from the carriage window and thinking it a good place to be.