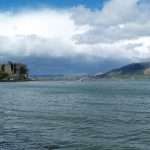 Did it matter that Leinster won rugby’s European Challenge Cup on Friday night? Did it matter that Clermont-Auvergne lost the rugby European Cup final yesterday? Did it matter that Yeovil Town Football Club won at Wembley this afternoon to secure promotion to English football’s second tier for the first time in their history? Each of the results would have meant little to the overwhelming majority of people in the world, but is finding a sense of well-being in trivial things that mean little to others not something universal?

Back in the 1970s, English pop singer Ian Dury made a lengthy list of things that created a sense of well-being, his Reasons to be Cheerful included:

Some of Buddy Holly, the working folly
Good Golly Miss Molly and boats
Hammersmith Palais, the Bolshoi Ballet
Jump back in the alley, add nanny goats.

Eighteen-wheeler Scammels, Domineker camels
All other mammals plus equal votes
Seeing Piccadilly, Fanny Smith and Willy
Being rather silly and porridge oats.

Dury’s song seemed odd at the time. Why would anyone be cheerful about such small things? The passing years have taught their importance; the power of small things to change a day.

As well as wins for Leinster and Clermont-Auvergne and Yeovil Town, what would be on a personal Dury-like list?

There would be the M7 motorway across The Curragh of Kildare and the road along the shores of Carlingford Lough.

There would be eating Softmints on the road east from Roscrea and drinking tea at farmhouse fire sides.

There would be the excited voices of Kilkenny as their hurlers again triumph in the All Ireland championship and the accents of the men from the North as they stand in the RDS singing ‘Stand Up for the Ulstermen’.

There would be the seated Patrick Kavanagh beside the Grand Canal and the buxom Molly Malone at the foot of Grafton Street.

There would be Yeats and Joyce and Beckett and Heaney.

There would be green Christmases and May sunshine and eternal June evenings and mild autumns.

The list could be lengthy; it could change by the day. Little moments of happiness, little indications of beauty and peace and well-being in the world.