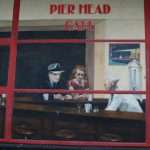 Leinster won the European Challenge Cup. We applauded the presentation of the trophy, and applauded the players, again and again and again. It was a comedown for the three times European champions (a bit like winning soccer’s Europa League, everyone knows it is for the also rans), but there’s not much cheer in the country these days, so plenteous clapping was a sort of catharsis.

Leaving Dublin, we headed westward on the M7 motorway, planning to stop at the solitary service station for food. Fish and chips seemed in order; fish and chips always marked special occasions.

In times before holidays were the norm, the village Sunday School outing to Weymouth was a highlight of the year (going to Sunday School was not a requirement – in fact, I’m not sure there was a Sunday School). The day was always rounded off with tea in a café – fish and chips and peas and bread and butter.

In student days, fish and chips marked the end of the week. The uncle, in whose house I lodged, would bring armfuls into his London home at teatime each Friday. ‘Now, who’s for what?’ he would say; pretending that he had forgotten the order on his way home.

In theological college days, food served in the college on Fridays was so bad that the extravagance of going to the Wimpy could be justified. The fish and chips came with tea served in battered aluminium pots and with slices of white bread thinly spread with butter. The food left you feeling full for hours afterwards.

Fish and chips have always been associated with special occasions since; far away places, seaside towns, holiday excess. There is nothing like soggy chips and battered cod to capture a cheerful moment.

It was 11.20 pm and waiting five minutes or so at the counter at Mayfield Service Station, the prospect of cod and chips seemed a satisfactory conclusion to the evening. Finally, the moment came to place the order.

The man at the counter looked at me as I were a sixteen year old in a pub asking for whisky, or a drinker trying to buy alcohol in the supermarket before the appointed hour. ‘I’m sorry, sir. We don’t serve fish after 11 pm’.

There was a temptation so say, ‘But I’m not a fish’. It was bizarre.

I turned from the counter and went to a delicatessen counter and bought a tuna wrap. The moment was somehow spoilt. There will be many more occasions when I buy fish and chips; it will be a long time before there is another visit to Mayfield.