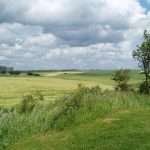 Sitting in the farmhouse kitchen, there was a lull in the conversation as the kettle was lifted from the range and water was poured on the tea. Silence is sometimes as companionable as chatter, and in the space there came the sound of a blackbird singing. Do blackbirds complain about the weather, if so the song may have been a plaintive cry against a chill wind which seemed to lose none of its edge in the weak May sunshine.

In a timeless moment of drinking tea and listening to birdsong, there was a connectedness with other moments.

Sitting in my at my grandparents’ farmhouse table on a summer’s evening with my grandfather who was capable of a profound and contented silence: after we had all gone from the table, he would drink tea from the china my grandmother regarded as obligatory and stare into the middle distance. To have disturbed him at such a moment would have been unthinkable.

Sitting at firesides of homes hidden among the townlands of Co Down, learning not to speak. People might have told tales of unbearable pain, bereavement, tragedy, murder, but instead the photographs on the mantlepieces provided whatever narrative of loss was necessary for a visitor to understand. The silence was, at times, heavy, almost intimidating, but to speak would have meant descending into platitudes, or the crassness of attempting to offer explanations for people’s suffering.

The moment of silence passed.

‘A biscuit? They are plain’.

We munched the Rich Tea, as though preoccupied with some philosophical question or scientific conundrum, and then the conversation resumed at the point where it had paused.

Perhaps it was the birdsong that transfigured the moment. If the sound of birds singing can bring a glimmer of hope to those trapped in the hellish bloodiness of the Western Front during World War I, then it must have the capacity to transform the mood of an Irish spring day. Perhaps the voice of the blackbird brought memories of childhood days, walking rural lanes on summer’s evenings when the last light of the day lingered long and when there was no doubt that time would last forever.

Today’s moment might have been twenty years past, or, given the unravelling of the pension scheme, might be twenty years hence, its location on a day in 2013 was merely a matter of chance. Timelessness is beyond times and dates and conversation is sometimes incidental to communication.