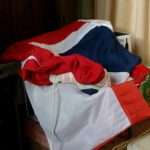 A four year old boy and I set out early for Belfast International Airport, probably at around 5 am in order to be at Aldergrove for the early British Midland flight to Heathrow. He had flown before but had reached an age when every detail was something of interest. We were served breakfast on the flight, in those days when airlines focused on service.

In the darkness of a February morning, there was not a great deal on the tarmac at Belfast to catch the eye of a small boy, but landing at Heathrow, the wonder seemed limitless. Aircraft everywhere, landing taking off, taxiing, parked, at gates; aircraft of every shape and size and in all the colours of the world. Each new sight brought a cry of, ‘Look!’

Reaching Terminal 1, we walked to the arrivals hall, collecting our baggage on the way. A small boy’s anxious mother had insisted we use a wrist strap to prevent us becoming separated – a two metre length of woven nylon connected us.

Grandparents awaited us at arrivals and their grandson was strapped into a seat in their car while his father assured him he would join them later; the four year old seemed completely indifferent to whatever his father might have said, there were too many new sights to absorb.

While they headed onto the M4 motorway and journeyed westward, a meeting in Southwark demanded a tube journey through the rush hour. Station after station was passed, hundreds, perhaps thousands, of people were observed; on the trains, at the stations. They seemed so ordinary, so peaceful, so civilised. People gave up their seats for older passengers, for women; they stood back to allow others to pass, they chatted, they smiled. Was this the land of the soccer fans who had rioted in Dublin the previous night? Was this the country of those who had smashed up Lansdowne Road stadium?

It seemed strange to look at my own country as an outsider. England for me was always a place of politeness, of courtesy, of consideration for others; it was a place of quaintness and tradition and eccentric customs; England for me had always been nice, in the best sense of that word. Why were thugs allowed to besmirch the name of the country?

There have been many moments since when the question has come to mind, but things are getting better. An outsider for thirty years watching the changing images of home, 2012, with the Diamond Jubilee and Olympic Games, showed an England at its best.

For the first time since that violent night in February 1995, England tonight play the Republic of Ireland. There will be no violence. However England may feel at the present, from here, it looks a much better place than in the past.