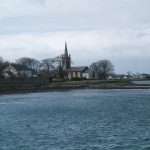 A terraced cottage overlooking the harbour, it seemed a perfect sort of place, but for her it seemed a hermitage from which the only break was the occasional walk down the street, to buy groceries at the shop or to attend church on a Sunday. There seemed neither television, nor radio, nor newspaper nor books in the house, and she declared herself that she was not in the habit of visiting others, nor of receiving visits.

Her daily routine comprised a cleaning of the house and to be followed by hours sitting at the fireside. Without new material to consider, conversations followed a predictable sequence. There would be the weather and thoughts on on those in the community who had died; then a retelling of the story of buying a new rug, the price tag of which could still be seen on the underside; then there would be complaints about her cousin whose chief failing was that he had broken family tradition and was known to visit a public house. The chief interest in the encounter lay in how many minutes might pass before the price of the rug was recalled; on one occasion it was only five minutes. Once the cousin had been reached, the conversation would start to limp.

It would always come as relief when the tea served in china cups had been drunk, and the opportunity came to offer thanks for the hospitality and to suggest that the time had come to say ‘goodbye’. The relief, though, was tinged with guilt at the thought her life might have been one of great loneliness, and that, even if her conversation was boring, it was about things important to her.