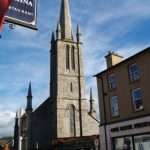 Turning right from the main road to drive the twenty or so kilometres to the picturesque banks of the River Barrow at Graiguenamanagh, the road sign announced that Enniscorthy was barely more than forty kilometres. Enniscorthy is signposted from many unlikely places, drive the N81 from Dublin through the West of Co Wicklow and there are regularly signs announcing the distance to Enniscorthy, despite the fact that someone from Dublin would have followed a direct route to the east of the Wicklow mountains. It is unclear why Enniscorthy is signposted from such spots, perhaps it is the allure of Co Wexford.

Personally, Co Wexford had always a mythical quality. Since first crossing the county boundary on a Halloween bank holiday Monday in 1985, it has retained a capacity to provoke thought, to evoke memories.

Perhaps that capacity began with the reading of William Trevor’s Autumn Sunshine, with its conflicting loyalties and contrasting attitudes to violence. Staying at a colleague’s house at Monart in 1986, it was not hard to imagine Trevor’s characters driving the country roads.

If a sense of the county as somewhere different began with Trevor, it continued with the reading of Seamus Heaney. Standing at Vinegar Hill, above Enniscorthy, on a July evening, there was a sense of the sorrow of the place, this was the spot described in Heaney’s Requiem for the Croppies,

Until, on Vinegar Hill, the fatal conclave.
Terraced thousands died, shaking scythes at cannon.
The hillside blushed, soaked in our broken wave.
They buried us without shroud or coffin
And in August the barley grew up out of the grave.

While Trevor’s work reflected on contemporary violence in the North and on the events of 1798 lamented by Heaney, Colm Tóibín’s The Blackwater Lightship explores a family coming together to care for a loved one dying from AIDS; it is a tale told with a profound sense of its Co Wexford location.

The mythical quality found in literature was to be reinforced by personal experience. Wexford was a place of retreat: in the days of the Troubles in the North, it was a place of safety, a place far from the border; crossing into the county brought a sense of security.

Co Wexford became not just a place of retreat, it became a gateway. Holiday after holiday would begin at the port of Rosslare, the names of the towns and villages along the N11 became a litany of contentment, each bringing closer the boat that would carry us toward summer sunshine.

Perhaps there is someone, in whatever government department is responsible for signposting, for whom Co Wexford finds similar resonances, perhaps the sprinkling of the south-east of Ireland with signs for Enniscorthy provides cheery notes along many routes. Perhaps it really is a mythical place.