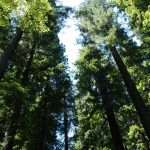 Elizabeth, who was born before the First World War, used to tell of how her father, who had been a doctor, had been appointed Director of the Zoological Gardens in Edwardian Dublin, the recompense for caring for members of the animal kingdom being considerably greater than that received for the king’s human subjects. ‘If there were animals that had been bred in the zoo, there used to be a plaque attached to their cage telling visitors of this. When I was born, he got one of those plaques and screwed it to the side of my pram, ‘bred in captivity.”

Ireland is not a place that could stock a zoo from its own resources, having 26 native land mammal species, just three native amphibians and only one native reptile. The absence of land species is attributable to rising sea levels after the ice age isolating Ireland (though the absence of snakes is popularly attributed to the power of Saint Patrick). Perhaps, though, such a dearth of wildlife is not such a bad thing.

A friend from Virginia in the United States phoned earlier. After a dissection of the performance of the Lions rugby team, conversation switched to more mundane matters: how was the farming in his community?

‘We have a number of farmers who have lost calves to coyotes’. It was a comment that disturbed my image of Virginia as hometown America.

‘You have coyotes that will attack cattle?’

‘Yeah, but they are not big; they are not the size of coyotes in other places. We’re not so far from the Blue Ridge Mountains. There are black bears there; they can be six feet tall when they stand up’.

It was not a reassuring thought. Bears can run considerably faster than humans. The idea of being confronted by a 400 lb black bear that was taller than me and could outrun me definitely shifted Virginia from being a hometown place to being a dangerous sort of place.

‘Also we didn’t have Saint Patrick here in the US, so we have snakes’. For me, snakes in America were the stuff of cowboy films; John Wayne stepping down from his horse in a desert landscape and drawing his Colt 45 revolver from its holster and shooting a rattlesnake about to strike the heroine; they were not a species to be encountered in somewhere imagined to be safe.

‘Bred in captivity’ seemed not such a bad way to contemplate such animals. Ireland might not be exciting, but at least it is safe.