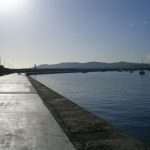 Thirty-four years ago today, I unwittingly picked up Ulysses for the first time. The A levels finished on Friday, 15th June 1979. On Saturday, 16th June, I went to the library, with the intention of borrowing books that were considered to be ‘important’. James Joyce’s A Portrait of the Artist as a Young Man and Ulysses were among the pile brought home.

A friend’s father thought it distinctly odd. He thought it very strange that any red blooded male should be reading Joyce; thirty-four years later his logic still seems unfathomable. A Portrait was read with great effort, but Ulysses was abandoned after forty pages and not picked up again until 2003.

What was it that that prompted an abandoning of the book in 1979? Having borrowed it, almost certainly inadvertently, on the 75th anniversary of the first Bloomsday, why stop at page 40?

On Page 41, there is perhaps the answer to my question:

— Mark my words, Mr Dedalus, he said. England is in the hands of the jews. In all the highest places: her finance, her press. And they are the signs of a nation’s decay. Wherever they gather they eat up the nation’s vital strength. I have seen it Coming these years. As sure as we are standing here the jew merchants are already at their work of destruction. Old England is dying.

He stepped swiftly off, his eyes coming to blue life as they passed a broad sunbeam. He faced about and back again.

The harlot’s cry from street to street
Shall weave old England’s winding sheet.

His eyes open wide in vision stared sternly across the sunbeam in which he halted.

— A merchant, Stephen said, is one who buys cheap and sells dear, jew or gentile, is he not?

— They sinned against the light, Mr Deasy said gravely. And you can see the darkness in their eyes. And that is why they are wanderers on the earth to this day.

On the steps of the Paris Stock Exchange the goldskinned men quoting prices on their gemmed fingers. Gabbles of geese. They swarmed loud, uncouth about the temple, their heads thickplotting under maladroit silk hats. Not theirs: these clothes, this speech, these gestures. Their full slow eyes belied the words, the gestures eager and unoffending, but knew the rancours massed about them and knew their zeal was vain. Vain patience to heap and hoard. Time surely would scatter all. A hoard heaped by the roadside: plundered and passing on. Their eyes knew the years of wandering and, patient, knew the dishonours of their flesh.

— Who has not? Stephen said.

— What do you mean? Mr Deasy asked.

He came forward a pace and stood by the table. His underjaw fell sideways open uncertainly. Is this old wisdom? He waits to hear from me.

— History, Stephen said, is a nightmare from which I am trying to awake.

Having completed, the previous week, an A level in history that covered the rise of Adolf Hitler and the hideous crimes of the Nazis, the casual anti-Semitism of Mr Deasy was probably too much to take. Perhaps Joyce was discarded because he had accurately reflected the attitudes of the people of his time, attitudes that had led to the horrors of the 1930s.

How many of those taking part in Bloomsday commemorations today challenged the Mr Deasys of our time?