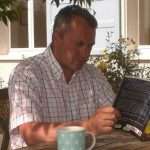 ‘You go through books like a knife through butter’. There was a temptation to say that butter kept in the refrigerator might go very hard and the progress of the knife might be very slow, but it was a time when one did not question schoolteachers (and certainly did not appear smart in the hearing of one’s peers).

Perhaps the syllabus had been completed, (was there even a syllabus to complete?), the final weeks in primary school were spent reading book after book after book. Initially, there would have been questions about the plot and the characters and what was liked and disliked, but eventually he gave up on even the most peremptory questions. It was a simple matter to ask permission to exchange the book finished for another from the shelf near his desk, thus his comment on the speed of their completion.

He did not appreciate that our perceptions of what was taking place were very different. He seemed to imagine that reading so many books enabled learning and improvement; the eleven year old doing the reading saw them as a matter of entertainment and escape.

The books chosen were almost invariably adventure stories, tales of derring-do by war heroes who always returned to tell the tale. (Our art teacher, a retired man who came on Wednesday afternoons, had been in the crew of a Lancaster bomber, reassuring us that heroes returned). Or there were stories of explorers going to exotic locations to defy danger and death. (Were Willard Price’s ‘Adventure’ novels among those on the school bookshelf, or did they have to come from the library? It’s hard now to remember).

In those years when the 1940s were still fresh in people’s memories and veterans of the Great War were still plentiful, the exploits of young men who had fought in the World Wars were recorded in many books. The biography which left the deepest impression was short, perhaps no more than twenty or so pages with a soft cover – the tale of Jack Cornwell VC, Boy Cornwell, who, seriously wounded, had remained at his gunnery post on HMS Chester at the Battle of Jutland in 1916, the sole survivor of the gun crew, standing awaiting orders. Perhaps it was his age that gave the story impact – he was just 16 years old, the age of some of the boys in the village, not so much older than those who sat in the primary school classroom.

More than forty years later, the school teacher would probably be more inclined to criticism than commendation. The war and adventure stories have been replaced by a penchant for detective fiction and magical realism, not a great leap forward. Sometimes people never really grow up.