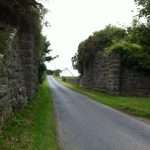 Irish railways never had a Betjeman, or perhaps Irish people had not a sentimental attachment to trains. Writers did not extol the virtues of  branch lines that carried handfuls of people to sleepy destinations. No-one became famous writing lines about steam locomotives and stone stations and characters in carriages.

Perhaps it is a residual Englishness that prompts a diversion from the main road to seek the course of the Kilkenny Junction Railway, closed fifty years ago and erased from much of the landscape. There had been a station on the line from Kilkenny to Portlaoise in the village, at least it must still be visible.

Perhaps the area had once been more populus, the road came to a T junction and it was a matter of guessing which route to take. Turning right, a road to the left suggested itself as a way of continuing south.

The village was reached. A distinctive building, a two storey house with a long single storey extension had the unmistakeable character of a former railway station. Once people had passed through this building, to travel who knows where? To the towns on market day, to school in cold and distant buildings, to Dublin on matters of importance, to the killing fields of Flanders and the Somme? How many sad moments had there been as tickets were bought in this building before going up the steps to the platform? How many happy moments had there been as children returned for holidays, as loved ones returned from foreign places, as soldiers came home alive?

South of the station, the buttresses of a former bridge stood as sentinels. The embankment mostly gone, the stone endured; the confidence of those who built the railways expressed in the craftsmanship of the builders.

The village has hibernated, no-one is to be seen. The former schoolhouse has long since been domesticated, long gone the days when the múinteoir listened to the spelling of words, the recitation of tables, and asked the names of rivers and counties.

A metal noticeboard is still affixed to a pillar of the churchyard gate. By the time the embossed letters of the board had been  pressed, the church had worship only once a month, and that at 3 o’clock on a Sunday afternoon. Holy Communion was celebrated at 9.30 am on saints’ days. Did three or four people once pass through these gates on a Saint Andrew’s Day  to hear tales from Galilee on a chill Irish November morning?

The church building is unmistakeably plain Nineteenth Century Protestant. Closed years and sold; vegetation now adorns the base of the spire; the louvres have missing boards; the decay is advanced. What tales might have been told by those lying below the green Laois turf, their headstones ready to tell of those below?