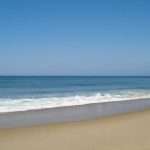 The talk in the hospital was that the good weather was set for another ten days. Someone spoke of a ‘blocking pattern’, the high pressure pattern that froze Ireland in December 2010 was set to redeem itself by delivering days of sunshine and temperatures in the eighties. Can it really last? In a country where the weather of all four seasons might appear in a single day, could there be a summer when the sun shone and the heat reappeared each day until autumn?

The summer of 1976 seemed a time of endless warmth, day upon day of predictable blue skies and rising mercury. There were but three television stations and, the part of England that was home, just the BBC on the radio, supplemented by the fuzzy sound of Radio Luxembourg when evening came, but they were sufficient assurance that the day’s weather was set to last.

They were times when television forecasters used boards bearing a map of Britain onto which they fixed magnetic symbols to show the coming day’s meteorological conditions. It was a matter of teenage curiosity why they used an inverted triangle to warn of rain, but in July and August 1976, there was not much cause for curiosity; rain simply disappeared from the outlook.

People whose lives were sealed off from each other by closed front doors began to venture outside, and, once outside, could hardly not talk to each other. Unless one wished to spend one’s hours closed inside, or sitting in a stony silence, there was a need to interact. Conversations began with those with whom there was previously only a nodding acquaintance. The tent taken on a three week camping holiday became only a roof under which to sleep, every waking hour was spent in the open air.

We experienced a world familiar to southern Europeans, life al fresco, life with a vibrancy that set it apart from that of the wet summers to which we were used. It was a summer used as a backdrop for Barbara Vine’s novel ‘A Fatal Inversion’. The summer warmth becomes an integral element of the story, contributing to the impression that there was somehow a new dispensation, a new order of reality. Vine’s story ends in metaphorical darkness, the summer of 1976 ended in actual darkness. As August drew to a close, the banks of cloud built up and the heat became oppressive; sunshine and breeze were replaced by a heavy humidity until with a flash of lightning, a roll of thunder, and a deluge of rain, familiar England returned.

Perhaps our sunshine will end in a downpour; in the meantime, our world is momentarily transformed.