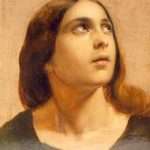 One Sunday evening in 1992, the telephone rang. It was a ward sister at the local psychiatric hospital, the Rector of the neighbouring parish who was Church of Ireland chaplain to the hospital could not be contacted and they were anxious that a patient receive a call.

The hospital was only four miles away and was reached in a few minutes. A lady from the ward had just returned from the district hospital where she had been diagnosed as having an aneurism. Her life was not necessarily in imminent danger, ‘she might live on another ten years, on the other hand, she might be gone in ten minutes’.

I sat at a table and talked to a woman in her eighties; sprightly, but with that slightly pale look that comes from being long years in an institution. She had come from a small coastal village back in the 1930s. Her family had not been large, she knew no-one from the village anymore. She seemed as sane as anyone I knew.

On leaving the ward, I went to sign the record of visitors that was kept in the ward office. Apart from the chaplains’ visits, the lady had received no visitors since 1982, some ten years previously.

The imminent danger remained no more than a danger; occasionally, I would take services at the hospital or do a chaplain’s round, if he were away on holidays, the lady would always greet me with a wave and a smile.

I never discovered why she had ever come to the huge 19th Century institution that older people in the community still referred to as ‘the Mental’.

Ann Morrisy’s tells of her work in the Church of England in her book Journeying Out:

My first employer in the Church was a Council for Social Responsibility. Just five years before I began working for this department it had operated under the name of ‘Moral Welfare’, and before that it was called ‘Rescue and Preventative Work’.

The origin of this work, 100 years before, was to rescue the young women who drifted into town from the countryside and who, in their desperation to gain food and shelter, might resort to prostitution. So the Church set up training schools to prepare these women to go ‘into service’ in local ‘well-to-do’ households or train to work in the new factories that needed more and more workers. Within ten years of establishing these projects a new issue emerged – the task of responding to those women, who despite being rescued, trained and placed in service, became pregnant. So, alongside the training schools, homes were set up where the woman (or girl) could give birth and from where her child would be adopted. As soon as she was free of her baby, the woman would return to the household where she was in service. However, if while ‘in service’ the woman became pregnant again then she risked being categorized as morally defective. To become pregnant a second time served as proof of her immorality.

In the filing cabinet in my office were the old volumes, full of casenotes, relating to these immoral women. The organization was not only lawfully empowered to label women, but to then condemn them to a hospital for the morally defective for the rest of their lives.

The seductive and physical power of the ‘gentleman’ in the household in which the woman was employed as a servant would never have been considered or even ‘seen’. Not least, because the very definition of ‘gentleman’ precluded the possibility of him forcing his attention on a young woman. The credence given to Eve as the route by which sin entered the world would have added to the common sense view that a young woman from the lower classes would be prone to moral defectiveness.

Those writing the case notes took their task very seriously, but it is unlikely they would have perceived the outworking of hegemony in relation to what they were doing. Or, if they did, it would be unlikely that they would have had the courage to speak out against the practice that they implemented.

Was the little old lady one of those classified as ‘morally defective’? Did she suffer sixty years incarceration because no-one would have suggested that men were as sinful as women?