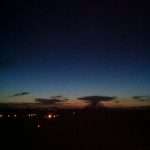 ‘Are we alone?’ The lecture at Trinity College looks at the implications of the Drake Equation, the mathematical calculation devised by Dr Frank Drake to estimate the likelihood of there being someone out there.

For someone whose mathematics knowledge did not extend beyond that required to pass the Certificate in Secondary Education, the Drake Equation is almost comprehensible. The Drake equation is:

It is an equation that would have terrified me as a child. Stories of aliens frightened me. I hated Doctor Who with its daleks and cybermen. I hated stories of “flying saucers”. I once spent an evening avoiding a television version of War of the Worlds. As the years have passed, the aliens have become an increasingly attractive option. If they have arrived here, their technology and knowledge is infinitely in advance of ours, and surely they would be more inspiring than the rulers of our world?

Yet reading Bill Bryson’s A Short History of Nearly Everything, I was forced to abandon any notion that an alien intervention might save us from mediocrity.

Space, let me repeat, is enormous. The average distance between stars out there is over 30 million million kilo­metres. Even at speeds approaching those of light, these are fantastically challenging distances for any travelling individual. Of course, it is possible that alien beings travel billions of miles to amuse themselves by planting crop circles in Wiltshire or frightening the daylights out of some poor guy in a pickup truck on a lonely road in Arizona (they must have teenagers, after all), but it does seem unlikely.

Still, statistically the probability that there are other think­ing beings out there is good. Nobody knows how many stars there are in the Milky Way – estimates range from a hundred billion or so to perhaps four hundred billion – and the Milky Way is just one of a hundred and forty billion or so other galaxies, many of them even larger than ours. In the 1960s, a professor at Cornell named Frank Drake, excited by such whopping numbers, worked out a famous equation designed to calculate the chances of advanced life existing in the cosmos, based on a series of diminishing probabilities.

What an interesting and exciting thought. We may be only one of millions of advanced civilizations. Unfortunately, space being spacious, the average distance between any two of these civilizations is reckoned to be at least two hundred light years, which is a great deal more than merely saying it makes it sound. It means, for a start, that even if these beings know we are here and are somehow able to see us in their telescopes, they’re watching light that left Earth two hundred years ago. So they’re not seeing you and me. They’re watching the French Revolution and Thomas Jefferson and people in silk stockings and powdered wigs ­– people who don’t know what an atom is, or a gene, and who make their electricity by rubbing a rod of amber with a piece of fur and think that’s quite a trick. Any message we receive from these observers is likely to begin ‘Dear Sire’, and congratulate us on the handsomeness of our horses and our mastery of whale oil. Two hundred light years is a distance so far beyond us as to be, well, just beyond us.

So even if we are not really alone, in all practical terms we are. Carl Sagan calculated the number of probable planets in the universe at as many as ten billion trillion – a number vastly beyond imagining. But what is equally beyond imagining is the amount of space through which they are lightly scattered. ‘If we were randomly inserted into the universe,’ Sagan wrote, ‘the chances that you would be on or near a planet would be less than one in a billion trillion trillion’.

A Short History of Nearly Everything, pp 48-49

What a depressing conclusion. Is there not a single extra-terrestrial out there who save us from our incompetent governments?