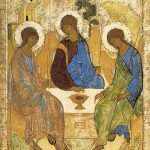 ‘He is the image of the invisible God, the firstborn of all creation’ Colossians 1:15

Icons have not been part of tradition. Anyone growing up in a Protestant or an evangelical tradition will at sometime or other have encountered teaching that ran very strongly against visual representations of God. There were Sunday School books that were advertised as containing no pictures of Jesus and even Nativity Plays would have met with opposition in some places.

At the time of the Protestant Reformation in the Sixteenth Century, the case seemed clear enough. Anything that depicted the divine was considered a breach of the Second Commandment, Exodus Chapter 20 Verse 4 says, ‘You shall not make for yourself an idol, whether in the form of anything that is in heaven above, or that is on the earth beneath, or that is in the water under the earth’. The Protestant Reformers reacted against what they saw as the ‘idolatry’ of the Roman Catholic church, in which the use and veneration of images had become commonplace.

The Wars of Religion in the Sixteenth and Seventeenth Centuries saw the widespread destruction of religious art. Protestant places of worship became known for their simplicity and plainness, even crosses were prohibited by some traditions. Paintings and statues were not to be part of the spiritual traditions of Reformed Christianity.

So, if our tradition is one where visual art has been rejected as part of our spirituality, how do we respond to icons?

We believe that Jesus was God in human form; that the one whose image could not be depicted because he could not be seen, and who prohibited any attempts at creating an image of him, took on human flesh and blood. Colossians Chapter 1 Verse 15 says, Jesus ‘is the image of the invisible God, the firstborn of all creation’. ‘Image’, the word used in that verse is translated from the Greek word, ’eikon’ – Jesus is the icon of the invisible God, through the flesh and blood of his body, we see beyond to God.

Arguing from the basis of God becoming incarnate, there were Christians in the early Church who believed that icons, images, could be things not to be worshipped in themselves, but things that drew our thoughts towards God who was their inspiration. If Jesus was the image of God, then the Old Testament prohibitions might no longer apply.
The debate over images was not something that began at the Reformation, it went right back to the Early Fathers of the Church. Basil of Caesarea lived from around 329 AD until 379 AD, and wrote a book ‘On the Holy Spirit’, where he says, ‘by means of the power that enlightens us, we fix our eyes on the beauty of the image of the invisible God, and through the image are led up to the supreme beauty of the spectacle of the archetype’. Basil argues that the honour shown to the image passes to the archetype, to the original, so it is not the image that is venerated, but God who inspired the image.

Icons differed from the religious art of the pagan religions among which the church grew. The religious art of the Greeks and Romans was generally three-dimensional, while the icons were painted on two dimensional panels. Statues began to appear in the Western Church from the Ninth Century onwards while the icon tradition continued in the East. The spiritual traditions of what became the Orthodox churches and the Roman Catholic church diverged at the time of the ‘Great Schism’ in 1054, there were disputes regarding church doctrines and authority, and an even deeper dispute over power—who ruled over whom? The churches excommunicated each other and were left to develop in very different ways.

While Christians in the early centuries of the church were wary of imagery, we do find the use of symbolism. Tertullian lived around 160-225 AD and in Chapter 7 of his book ‘De Pudentia’, he writes about the image of a shepherd painted onto the cups in Christian households , ’Let the very paintings upon your cups come forward to show whether even in them the figurative meaning of that sheep will shine through’. The picture of the shepherd calling to mind the parable of the Good Shepherd and being used by Tertullian as a symbol for Jesus. Clement of Alexandria, who lived at a similar time to Tertullian, around 150-215 AD, wrote of people’s signet rings saying, ‘let our seals be either a dove, or a fish, or a ship scudding before the wind, or a musical lyre . . . or a ship’s anchor; . . . and if there be one fishing, he will remember the apostle, and the children drawn out of the water. For we are not to delineate the faces of idols, we who are prohibited to cleave to them; nor a sword, nor a bow, following as we do, peace; nor drinking-cups, being temperate’. For both Tertullian and Clement, visual images could be used as a way of teaching people about the faith.

Icons in the Orthodox tradition developed mainly in a way that symbolised the holiness of the person being depicted rather than their humanity. Symbolism was used to present very complex stories and ideas in a way that a people who were not literate might understand. A comparison might be made with the ancient Irish high crosses where the cross and its base might be carved with pictures from Bible stories to tell people about their faith.

Orthodox theologians would not talk about icons as being painted, rather someone who produces an icon is an icon ‘writer’. The icons are not seen as pieces of religious art, but are pieces of written theology. The icon writer uses images instead of words to say things about God; the icon is intended to connect a worshipper with God in the way that the words and hymns do in traditions that do not use visual material.

The Orthodox spiritual tradition is one of extraordinary resilience. When the Communists seized power in Tsarist Russia in 1917, they regarded the church as outmoded and irrelevant. Atheism was promoted and the Orthodox church was seen as something that would disappear as people came to see the superiority of the Communist system. The church was tolerated as it was seen as the domain of old women who would eventually die, taking their faith and traditions with them. Seventy years later, Communism collapsed and the church lived on, and the women who gathered to pray could not have been the same women as in 1917. Within their spirituality, they must have found a huge strength.

Icons have not been part of our spiritual tradition, but do we have something to learn from a tradition that emphasises the use of all the senses?

Our tradition is very cerebral, very much about words and reasoning, very much about arguments and thinking, we do not have a tradition that engages with people’s sense of sight, or touch, or smell. At times when people‘s reading skills are not what they were in the past, when the capacity to listen to speech is greatly reduced, do we need to look at ways that communicate with people’ hearts?

You shall not make for yourself an idol, whether in the form of anything that is in heaven above, or that is on the earth beneath, or that is in the water under the earth’. An understanding of the meaning of icons shows that they are not the images prohibited by the Commandments. Being honest, idolatry in our times is much more people’s attachment to material wealth, houses, cars, money, than it is devotion to anything that might be regarded as religious.

The icon writers attempt to use their skill to write about God. How well would our church have survived seventy years of oppression? How do we tell people about God?