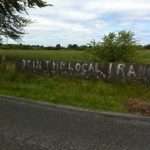 ‘JOIN THE LOCAL IRA – PROVOS’ proclaims the graffiti, hand-painted in white capital letters. It is an incongruous intrusion into the tranquility of the borderlands of Leinster and Munster; a political statement in farmland far from Ulster.

How long has it been there? Presumably, forty years or more; the painter feeling the need to advise potential recruits that it was the ‘Provos’ they should join and not the ‘Stickies’, the Provisional IRA and not the Official IRA.

But why paint such a graffito at all, even in the 1970s? It is not as though the IRA went around advertising for recruits, not as though there was an office to which someone might go in order to complete enlistment forms.

And what does it mean by the ‘local IRA’? It lends a domestic air to a murderous organization.

What was the purpose of the graffiti? It was hardly the work of the IRA themselves, they were hardly the sort to go out with a paintbrush and pot of white paint in order to daub slogans on roadside walls, so, presumably it was painted by someone with idealistic notions of what it meant to be a ‘Provo’.

But what did the painter hope to achieve? Had someone asked him where they might join, it is unlikely he would have known. If British intelligence struggled for information, it was not likely a young fellow in the country would be apprised of the activities.

But who would it have intimidated? Not the British authorities, their jurisdiction is far distant from this place. Not anyone powerful or rich, this is a place of working farmers. The only people who would have been offended would have been the ordinary people of the community who lived peaceably together and who abhorred all political violence.

Community relations are excellent, one could not wish for kinder, more generous neighbours. Were it not for the support of the Catholic community, the Church of Ireland church might long ago have closed.

Perhaps a day has come when the graffiti might be cleaned off, but perhaps it would be a mistake to do so. Perhaps it is a daily reminder to passers by of the land from which they have come, strengthening their resolve that such times shall never return.