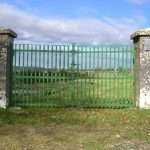 Twenty-eight degrees it may have been at 11 o’clock, but the range was lit. Perhaps having seen more than seventy Irish summers, he was sceptical of heatwaves, fearful lest the mercury in the thermometer might suddenly fall more than fifteen degrees before the turf could be lit. ‘Look at that heat’, he said, ‘and it’s only just after ten o’clock in the old time’. His scepticism about Irish summers seemed to extend to resisting setting his clocks to anything other than Coordinated Universal Time.

The conversation turned to graveyards in the vicinity, of which there seem a great number. Burial grounds appear in unlikely places, often unconnected with any church. Some are the last remnant of ancient religious sites, some began as the private burial place of particular families, some seem likely to have just appeared because people had to be buried somewhere. In many places, the burying ground is rough and poor land, in Nineteenth Century Ireland good land would have been too precious to be used for anything other than growing food.

One graveyard was no more than a quarter of a mile from his gate. ‘Do you know the space at the gateway?’

‘There’s no headstone but there is a man buried there. Joe was his name, or was the name we gave him anyway.

He used to walk the roads around here. He would do a bit of work here and there; get his dinner or his tea. He didn’t mind where he slept, people’s sheds or barns. Everyone knew him.

Anyway, one night a man was going up the road there and Joe was lying at the roadside. He went over to him, and Joe was dead. They got the doctor, and the doctor said ‘what can I do? The man is dead’.

It was hard to fault the legality of the process. The man had been certified as dead by the doctor and he had been buried with the usual rites and ceremonies of the church, but there seemed a great sadness. This man had once been a member of someone’s family, once loved by a mother, once, perhaps, having brothers and sisters, once a boy who played in the country and enjoyed the company of friends. Once he had been someone more than ‘Joe’ who walked the roads, and even Joe had thoughts and feelings and, perhaps, even hopes.

Will someone one day attempt a family tree and find someone missing, missing because he lies unknown in a small country graveyard?