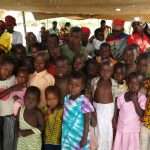 Beyond the city limits of Bujumbura the road towards the Democratic Republic of Congo becomes unpredictable, the tarmac subsiding into potholes, sometimes there being more potholes than road. Driving demands intense concentration, a misjudgement might cause substantial, even terminal, damage to a small family car. Progress is important, a village is to be reached by 9.30 am and it is already past nine.

A convoy of white buses, with black letters painted on the side proclaiming ‘UN’, are moving slowly and, despite the road surface, we move to overtake them. An oncoming cyclist is forced to retreat to the side of the road to avoid collision. Once back on our own side of the road, it is safe to ask questions.

‘What are the UN buses for?’

‘Refugees from conflict in DRC’.

‘I thought the trouble was further north?’

‘There is trouble further north – this is different trouble. The buses are going to fetch people who have fled across the border’.

‘Where will they take them?’

‘To camps on the other side of Burundi; the UN says they must be 150 miles from the border’.

‘Isn’t that almost impossible in Burundi?’

Sometimes conversations are pointless; what will be changed by repeating facts already known? There would be no reports on the world media about busloads of poor people being taken across a poor African country to live in even great poverty in UN camps.

We reached our destination. More a scattering of mud and rush houses than anything that would merit being described as a village.

A small boy ambled over to the car. His walking was severely impeded by his legs being curved to one side; the effects of rickets or polio? It was not appropriate to ask. His eyes did not seem to focus well. He stretched out his right hand and grasped my companion’s left hand, raising his left hand so I might take it in my right.

We walked across open ground to the place where people were gathering for the local church’s morning service. The proceedings lasted until midday, during which time the boy sat impassively watching all that happened. He sat alone. No-one seemed to pay him attention.

As we were about to leave, the boy walked up to us. My companion took out his wallet and withdrew a 100 franc note (about 5 cent), the boy grasped it and set off towards where a stall had opened up.

‘What was that for?’

‘A doughnut; he will buy a doughnut, that is a special treat’.

A wry smile. ‘What do you think?

Can we imagine if, instead of being born in a hut in the middle of Africa, that child had been born in a hospital in London on 22nd July 2013? Can we imagine what a different childhood he might have enjoyed? Please do not tell me that we cherish all children equally.