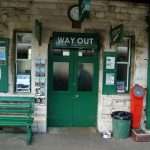 When did the ‘heritage’ industry as it now exists begin? Not the preservation of artefacts from the past in museum glass cases, each with neatly typed labels, but the desire to re-create entire houses, railway stations, factories, villages even, exactly as they were?

Perhaps the economic growth of the post-war era combined with an awareness that rapid modernisation was erasing entire elements of the past in order to prompt a desire to preserve items and their contexts. In Belfast, the Ulster Folk Museum was established by a 1958 Act of Parliament and opened in 1964. By the 1970s, the folk museum was a common phenomenon, people reflecting on a past that, in many cases, was not so long ago.

It has never seemed quite clear why particular periods of history have become regarded as normative. A farm cottage might have been furnished in many ways during its history, why regard the late 19th or early 20th Century as the moment at which history should stop? Perhaps it’s simply the case that certain periods provide an abundance of material for exhibition. Perhaps that is why the steam railways seem to go for the 1940s and 1950s; those were the days when the potential source of inspiration and supply of materials were at their greatest.

Visiting the National Museum of Wales’ Big Pit during the spring, there was not only an entire coal mine preserved as a museum, but former miners as guides. It is an experience that will lose something of its power when those men are no longer fit to lead the tours.

What the desire to preserve particular aspects of heritage tells us is that we believe there is value in conserving contexts, that it is not just the items that matter, but their location, their juxtaposition with all the things around them. It is the artefacts in their original contexts that convey to us an essence of the past.

Most clergy will have encountered situations of grief where people have kept the room of a deceased loved one as it was when the person died. In college days it was an attitude we were told to discourage, terms like ‘morbid grief’ were used. It was contended that people could not move on until they had dismantled these domestic memorials to the person they had lost.

Undoubtedly, there are psychologists and counsellors who would regard the preservation of a room as something ‘unhealthy’. But, when we look at our fascination with heritage, we would not consider a cottage furnished as it was in the Nineteenth Century as unhealthy, nor would we consider the conservation of the homes of particular famous people as they were when the people lived in them as something unhealthy, why apply a different standard to bereaved families? Why is it morbid to retain the room of someone much loved, but not morbid for the National Trust in England to preserve the childhood home of  John Lennon as it was when he lived in it?