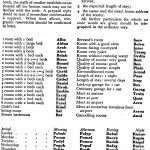 Trying to teach the odd class in primary school is not so difficult; sometimes, the hardest part is trying to read the answers, particularly when textspeak is used. It is hard to imagine what our primary school teacher in Somerset of forty years ago would have thought of the student who wrote, ‘i dont no’. Not knowing was forgiveable; not capitalising ‘I’, not using punctuation and misspelling ‘know’ were more heinous offences.

Of course, it is the prerogative of each older generation to think that standards have slipped since their day, that things are simply not what they used to be. When the British Prime Minister David Cameron mistook the meaning of ‘LOL’ thinking it meant ‘lots of love’ and not ‘laugh out loud’, it was not such a big issue; who would expect the premier to be aware of the usages of a mode of communication many older people would regard as teenage? Textspeak is more often the argot of youth than the language of Downing Street.

If each older generation thinks standards have slipped, it is the habit of each younger generation to think they are the first to have discovered something. Given that the mass availability of mobile phones is only two decades old, it would be easy to think textspeak is indeed the invention of the young; except it is not.

Far more costly than having to send a second text through being unable to condense one’s message was the cost of sending a telegram in the days before digital communication. Telegrams were expensive, adjusting for inflation, a single word might cost more than an entire text message now; it was important to say as much as possible in as few words as possible. Telegrams were clipped, terse, abrupt communications, language pared of social nicety.

Sitting reading the AA Continental Handbook for 1965 in the quietness of a summer evening, there was a moment of discovery. The textspeak of telegrams to hotels was not simply a matter of abbreviation, it was a language entirely of its own, far more impenetrable than anything that might appear on the screen of the phone of a fifteen year old in 2013.

Now, a good double room for one night, please, with private bathroom, for one night arriving on Monday evening.

Could 21st Century texspeak match that for complexity? 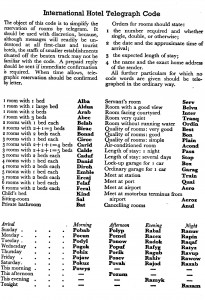