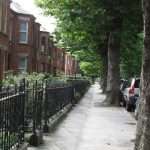 Conversations – whether one desires them or not – are the stuff of everyday life in a rural community. One can spend much time in chat, saying nothing. Not to speak would be unthinkable, would invite negative comment, give one a bad name. Even complete strangers are not passed on the road without a wave.

It is easy to forget that it is different in the city. Walking down a street, a man had pulled a highly polished Nissan Micra car into the space at the front of the house; the space might once have been flower beds, but was now paved. Closing the gates, he  looked up. There was a brief moment of eye contact, but before it was possible to bid him a “good evening”, he turned sharply away. He must have been eighty years of age. It seemed strange to pass within a few feet of him and not even to express a word of acknowledgement.

Did he distrust people dressed in polo shirt, cargo pants and training shoes, or did he avoid people in general? Perhaps in clerical attire, it would have been possible to have stopped and engaged him, to do so dressed casually would have seemed strange, even suspicious.

There are times when the temptation is strong just to say “hello” to complete strangers, to ask them how they are and where they are going. Sometimes the opportunities arise. Crossing to Clear Island, off the coast of Co Cork, in June, the forty-five minute outward journey was spent in conversation with a barman from the island, whilst the return to the mainland was an opportunity to quiz one of the crew members about his work. Perhaps it is a question of context: on a boat, in a train, a plane, a bus, there is a spatial bond, if nothing else, between people; perhaps captive subjects as well.

Maybe people don’t want to talk, don’t want to be quizzed. Maybe even questions as to how they are and where they are going can seem like intrusions, interrogations. Maybe the man with the Nissan Micra had spent the afternoon visiting family members and was tired of talking. Who knows?

The most interesting conversations might be those that are impossible. Travelling in the early hours of the morning when driving to or from Dublin airport or when visiting people in extremis, there are often other vehicles travelling through the darkness. In some cases, their business is made clear by their vehicle, but others are more anonymous: what can have them out on the road at such an hour? What story might they tell if encountered at a service station?  Devising characters for the figures in the cars, and plots in which they are actors, can help fill the void of the night hours.

Anonymity and different social dynamics create a silence in the city, conversations that might have taken place among country people do not occur in urban contexts. There is a loss of the sense of community that chat creates, but, on the other hand, one is relieved of having to face wearying questions about how one is and where one is going.