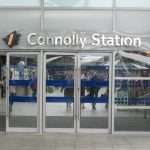 The escalator was working today. I remember an evening in September 1981 when it was not. We walked up the steps to Connolly Station and awaited a train to Dun Laoghaire. The trains were old and battered, orange bucket seats ran down each side of the carriage. A friend would later tell me that they were not carriages at all, but former railcars conscripted as carriages because there was no money to buy the rolling stock necessary to provide a proper service.

We had stepped onto Irish soil for the first time in August 1981, having travelled through the night, and we had slept in the late summer sunshine on the wall outside the West Pier. Returning to Dun Laoghaire on that September evening, We had discovered that the night ferry to Wales we had expected to catch had ceased to run the previous week. We had bought something top eat from a stall, the lady offering an apology for not being able to offer a proper exchange rate for the Sterling we had proffered, our Punts having been exhausted. Being without cash, we had slept on the bench opposite the entrance to the terminal, towels over us to keep warm in the chill of an Irish autumn. Gardai had come to us in the night and shone torches in our faces, just to make the point that sleeping on a bench was something they didn’t like.

Connolly Station would feature again in important moments in my life. In that far off summer, a promise to parents had been made, that we would not travel north of a line drawn between Dublin and Galway. We had kept that promise, our travels had been in Cork and Kerry, in places far removed from the violence of the North.

But, in December 1981, the moment to face the North had arrived. I crossed the Irish Sea in darkness to Dun Laoghaire and caught a bus to Connolly to catch a train northwards for the funeral of a man whom I had not met, but whose daughter I would marry. It was strange, catching a train at Connolly, to travel from one world to one that was very different. Both worlds were entirely different from that in which I had grown up.

In the years since that first encounter with Connolly, our relationship has been ambivalent. Sometimes it has been a place of departure from an unknown world to the one in which I lived; then it was the place from which I departed from the city that had become home to a country which I had left; and now it is just a place that is passed.

It is odd how places are shaped by our perceptions.