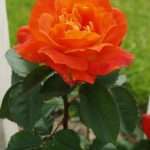 The quietness of the room was only broken by the soft hum of the electronic pump that kept inflated the air mattress. A frieze had been made and stuck to the wall above the bed – a large sheet of white paper with assorted pictures and cuttings. In the centre was a typed sheet, a brief biography in a calligraphy font. Perhaps it was intended as a prompt to the care staff, things of which they might remind him, for the brief details would all have been known to family members or friends.

His working days had been spent with Bord na Mona, a photograph above the biography showed a man seasoned by years of outdoor life. In brown tweed jacket, dark blue pullover, pale blue shirt and dark tie, the background suggested some social function, maybe a works Christmas outing. The smiling figure seemed a different person from the more recent depictions.

Photographs had been taken at a birthday and printed on sheets of A4 paper. In one, a smiling care assistant sat beside him, her head tilted to be beside his, her youthful grin and smiling eyes accentuated his lack of expression. In another, he was being presented with a cake, those around him staring at the camera. Sitting in a typical nursing home chair with a tray fixed to its arms, he seemed indifferent to the proceedings.

The biographical notes said he had been a keen gardener; growing vegetables, as one would expect of someone of his time, but also being a keen grower of flowers which he would present to his late wife. It was not hard to imagine the smiling man in his brown jacket standing at the kitchen door with a bunch of bright yellow daffodils or deep red roses. Deep within the mind of the man who sat staring ahead, did the former self linger on? In the recesses of long term memory, might he still ponder days cutting turf and evenings digging potatoes?

The frieze included photographs of assorted flowers and a story book thatched cottage with its picture postcard garden; their natural beauty contrasted with the hard reality of the equipment used in caring for the man. Perhaps the single most important thing in in the room was that retention of a sense of beauty, for in beauty there is a sense of dignity, a sense of the worth of things for their own sake, a sense of something beyond the immediate reality, a sense of the man as he once was.

Long may there be carers who cut out pictures and stick them to sheets of paper.