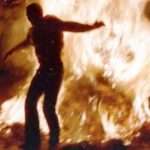 In childhood years, did everyone stare into the flames in the fireplace and see shapes and figures and imagine tales of long ago or is it a personal eccentricity?

My grandmother lived frugally, but once the end of August came and the evenings darkened and the first autumnal chill began to be sensed in the night air, she would light the fire. The farmhouse was a place filled with memories and no evening would pass without the recalling of someone whose demise was long past. Perhaps it was the conversation that provided the aural stimulus for the imaginings shaped by the flickerings in the hearth.

The logs would have been cut mostly from fallen trees, their size and shape would vary, and so would the rate at which they burned. Some were seasoned and would quickly ignite, others still retained sap and would hiss and spark and necessitate the fireguard if they were not to damage the hearth rug.  Staring at the fire, there seemed moments of timelessness, as if one could stop the passing of the days and seize a moment; as if the onset of autumn could be halted and the magic of summer could be forever held.

A fire now still has the capacity to connect thoughts with the rambling ideas of those closing days. Perhaps it is the nature of the experience that has the evocative power. Did the people who lived in the caves in southern France find inspiration for their wall paintings from sitting watching the movement of light and shadows against the rock that surrounded them? Did the people who lived in the medieval farms that shaped the progress of England stare into the fire and wonder what country future flames would see? Did the forebears who lived within the thick blue lias stone walls of the farmhouse ever wonder who might in the future sit at the fireside?

Look for fires now, and they are becoming scarce. Even those burning logs or coal or turf prefer stoves and ranges to the inefficiency of the open fire, but, in the progress, an ancient element of human experience is being lost. No longer will future generations of young people sit at firesides and feel a community with the people of past millennia, no longer will they see faces and figures and unfolding tales as the logs burn to ashes.

Of course, it might all be personal eccentricity, maybe everyone else looked at the flames and saw just – flames.