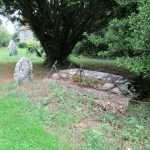 Setting out tables and chairs for a parish barbecue in the warmth of an August afternoon, there is a great sense of contentment. Lining up the tables and arranging six chairs in neat lines around each, there was a sense of relief no-one was watching, no-one to ask what nature of compulsive behaviour prompted someone to arrange furniture with a military degree of precision. To have been a caretaker would have been a satisfying job.

Career options for clergy are fairly limited. One can go from doing a job in one place to do an identical job somewhere else, or, judging by the trend in advertisements for posts, doing the same job somewhere else for no reward other than accommodation. The skills set arising from typical clergy training does not really qualify one for anything else: an understanding of esoteric Near Eastern religious matters, a hazy knowledge of history, an occasional encounter with philosophy, a skim through psychology, an odd amalgam of unlikely subjects; hardly the stuff to equip one to peruse the “situations vacant” column in a secular newspaper.

Without a competence to perform anything demanding any degree of specialism, only a job demanding the most general and simple of skills would be a possibility, but it would not be such a bad option. The most content of people in history seem to have been the monks in the medieval monasteries, spending their lives attending the daily services and carrying out the duties assigned to them, duties which were often the most plain and ordinary of tasks.

An abiding image in the recesses of the mind is the thought of a monk standing amidst the long blades of grass in a graveyard, the silence of the summer day being only broken by his swinging of a scythe through the grasses. To him, would time not have been timeless? Each day’s routine would have provided structure and security, the monastery itself being a bulwark against the darker side of the outside world.

Perhaps thoughts of the desirability of such an escape is a manifestation of a deep insecurity, a reflection of a desire to disengage from the world for fear of encountering anything painful; perhaps it marks a realisation that the clerical life offers little by way of encouragement or progress. Perhaps it arises from an unthinking logical positivism where the only things that are real are the things one can see or touch.

Whatever the deep-rooted psychological cause, there is something deeply therapeutic in arranging chairs.