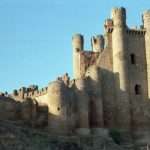 “They say that Edmund would have been about 30 – which is far too soon to die. Morons stripped him, tied him to a tree, and made him into a target. This mindless taking of life and rattling of weapons . . . ”

Ronald Blythe writes of the martyrdom of Saint Edmund, he of Bury Saint Edmunds. Tradition says that Edmund was king of East Anglia and was shot with arrows by the Vikings before being beheaded because he refused to renounce his faith.

If the Vikings who killed Edmund are “morons” then what does one make of moments such as the speech of Pope Urban II as he launched the First Crusade in 1095? Even a charitable report, by Fulcher of Chartres, has him saying:

I, or rather the Lord, beseech you as Christ’s heralds to publish this everywhere and to pers­e all people of whatever rank, foot-soldiers and knights, poor and rich, to carry aid promptly to those Christians and to destroy that vile race from the lands of our friends. I say this to those who are present, it is meant also for those who are absent. Moreover, Christ commands it

“Destroy that vile race from the lands of our friends”? Did those words give license for the massacre of the population of Jerusalem? If the Vikings who killed Edmund were morons, what of Urban II?

Or what about the massacre of the population of the French city of Béziers in 1209 of which Caesarius of Heisterbach wrote twenty years later,

When they discovered, from the admissions of some of them, that there were Catholics mingled with the heretics they said to the abbot, “Sir, what shall we do, for we cannot distinguish between the faithful and the heretics.” The abbot, like the others, was afraid that many, in fear of death, would pretend to be Catholics, and after their departure, would return to their heresy, and is said to have replied, “Caedite eos. Novit enim Dominus qui sunt eius – Kill them all for the Lord knoweth them that are His”, and so countless number in that town were slain”.

Estimates as to how many died vary. The claim of twenty-thousand is probably an exaggeration, but the number who died through the desire of the Church to suppress the “heretic” Cathars numbered thousands. A slaughter under the authority of an abbot: was he a moron?

The candidates for the appellation of “moron” in Christian history are innumerable; the targets of their arrows and swords and axes and stakes and nooses, and all the other instruments of medieval torture and killing, are now mostly hardly remembered. In one place heretics, in another Jews, in another Muslims, in another Catholics, or Protestants, or Anabaptists, or anyone else who differed from those who held power by force. The behaviour of those who killed Edmund seems trivial when compared with what was to follow. If they were morons, then the Church would provide ones considerably greater.