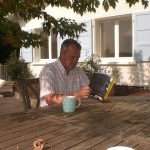 When did our ideas of privacy develop? Was it with the emergence of an urban society where the sheer size of the population made anonymity possible? Was it with the growth of affluence, affording people the opportunity to close the front door of their own home and in so doing enter a private and personal world? Was it with the decline of traditional heavy industry where generations of people from the same streets had gone to the same workplaces, to be replaced by disparate individuals going to disparate employers? Was it with the breakdown of traditional communities, the bonds that once held them together having loosened?

Privacy has a long history, but in times past it was neither universal nor something that was assumed to be normative.

Growing up in a very small village in the middle of Somerset in the West of England where there were forty-four children at the two teacher primary school meant growing up in a community where everyone knew everyone else. The school teacher would have told us that the population of our village was three hundred. When a community only numbers three hundred, it means that not only do you know everyone, to a greater or a lesser extent, you know everyone else’s business as well. You heard how much they had sold livestock for at the market; you heard how many gallons of milk they got from their cattle; you heard how much they had paid for the land they had bought.

There were undoubtedly people sufficiently affluent or sufficiently solitary to live their lives apart from those around, away from the gaze of others, but most people seemed untroubled at living under watching eyes. Matters that might need discretion or concealment were not frequent and, if the wagging tongues of the community talked about you, there was consolation in the fact that someone else was being left alone. Had we known it, we might have smiled at Oscar Wilde’s comment that “there is only one thing in life worse than being talked about, and that is not being talked about”, but few of us would have known much of the works of Oscar Wilde.

To have been overly concerned with privacy in such a community would have been eccentric, it was not a possibility for most people. Living now in what has been called a “global village”, why are we surprised that the privacy we had assumed has again begun to disappear? Why are we troubled by Facebook issuing a Global Government Requests Report? The ties that create a sense of belonging to a village community are the links that leave us vulnerable to scrutiny; if that was the case in a rural village of the Sixties it is as much the case in the virtual village of the Teens.

Clergy will be used to being watched, even the details of our pay appear in books of reports (if you don’t have the report to hand my stipend for 2013 is €37,133 and my car allowance is €12,395), and there are undoubtedly people who could tell you where my car was this afternoon.

Living in a democratic society, government scrutiny can hardly be a source of fear, as a First Century legal expert once wrote, “rulers are not a terror to good conduct, but to bad”. Maybe the simplest answer, then, is to live as if people are watching.