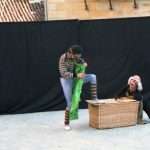 Despite spending three years in college when he was principal, even in those years so many people would attempt impressions of him that it is hard now to remember what he really said. Did he really speak of “that wicked east wind”? Did he really threaten that his terrier would sniff out whiskey bottles in people’s rooms? Did he constantly crease his brow and earnestly utter the words, “I know”?

Laid to rest beneath Co Wicklow turf in 1996, he can hardly tell us which of the accounts of him have a ring of truth. There is a danger that he will eventually disappear entirely behind the caricatures that have taken shape with the passage of time.

Was it Max Bygraves who used to tell a story of taking part in a competition for the best impression of Max Bygraves and coming second? Whichever comedian told the story, and whether or not there was a shred of historical truth in it, it illustrated the human preference for art over nature, to trust our inclination over the facts.

Tom Stoppard understands our preference for the caricature over reality. In Rosencrantz and Guildenstern are Dead, Guildenstern criticizes the actors for their depiction of death. The Player says that it is Guildenstern who is mistaken, that it is the play-death that people want to see:

GUIL (fear, derision): Actors! The mechanics of cheap melodrama! That
isn’t death! (More quietly.) You scream and choke and sink to your knees,
but it doesn’t bring death home to anyone-it doesn’t catch them unawares and
start the whisper in their skulls that says-“One day you are going to die.”
(He straightens up.) You die so many times; how can you expect them to
believe in your death?

PLAYER: On the contrary, it’s the only kind they do believe. They’re
conditioned to it. I had an actor once who was condemned to hang for
stealing a sheep-or a lamb, I forget which-so I got permission to have him
hanged in the middle of a play-had to change the plot a bit but I thought it
would be effective, you know-and you wouldn’t believe it, he just wasn’t
convincing! It was impossible to suspend one’s, disbelief-and what with the
audience jeering and throwing peanuts, the whole thing was a disaster!-he
did nothing but cry all the time-right out of character-just stood there and
cried… Never again.
(In good humour he has already turned back to the mime: the two SPIES
awaiting execution at the hands of the PLAYER.) Audiences know what to
expect, and that is all that they are prepared to believe in. (To the
SPIES.)
Show!
(The SPIES die at some length, rather well.)

“Audiences know what to expect, and that is all that they are prepared to believe in”. The Player’s words are a salutary warning to anyone trying to persuade an audience, whether that audience be for the theatre, for politics, for business – or even in church.