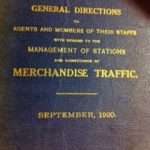 Released on 12th March 1929, “From Galway to Dublin” by Dan Sullivan’s Shamrock Band is probably a record to which one might listen once, but be tempted to change channels if it were to be played a second time. The early recording features the naming of each of the stations through which the train will pass on its excursion, along with a brief comment on the town, with someone laughing and providing their own comments at each announcement, against a background of traditional music. Were it to be re-released it would probably find airtime on one of the progressive music programmes; as an artefact of the 1920s, it was played on Philip King’s “The South Wind Blows” on RTE radio.

The sequence of stations on the line in 1929 differed little different from the stations today, were Dan Sullivan to travel to travel the route in 2013, his narration would not need much adjustment. One omission that would be required is Streamstown, even in 1929 Sullivan was hard-pressed to say anything of Streamstown. While Ballinasloe had its horse fair and Mullingar its heifers, all that is said of Streamstown is, the nonsensical, “When I was a lad I used to chase leprechauns here”.

Streamstown railway station closed on 17th June 1963; a fact noted on a fly page of a book bought at an auction last year. “General Directions to Agents and members of the Staffs with Regard to the Management of Stations and Conveyance of Merchandise Traffic’, Sept 1920” probably never had a wide circulation when published and its purchase, more than ninety years later, probably displays a streak of eccentricity, but it seemed to express the spirit of a former age.

Streamstown opened in 1851 and survived 112 years before disappearing from the timetables. Driving to Co Westmeath for a funeral recently there was a temptation to divert on the return journey and to locate the place where a stationmaster once sat in his office reading the book of “General Directions”. would he have thought the place so anonymous that there was nothing whatsoever that might merit mention in a song lyric? Had Dan Sullivan written to him, might he not have turned from such matters as Consignment Notes for Dangerous Goods and the Dispatch of Invoices, and found many things worthy of notice by Mr Sullivan’s excursion travellers from Galway to Dublin? Wouldn’t every community feel a similar pride in their locality? Wouldn’t people with a sense of place have stories to tell of the townland or village the call home?

Poor Streamstown station, thirty years before it was closed it had been written off in an American popular song. After that, it probably didn’t stand much of a chance.