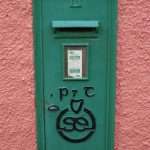 One day I must learn his name. An old black bicycle, a long grey raincoat and a flat cap, he is a picture from 1950s Ireland, except he was pedalling not through a black and white photograph, but down the main street, this afternoon.

It would not have been hard to imagine him cycling to a dance on a Sunday night, to one of those buildings to be found in most Irish towns that now serve as carpet warehouses, or furniture showrooms, or are used by various community groups; the places that were once dance halls now pressed into more utilitarian uses in their advancing years. Would he have parked his bicycle against the wall with dozens of others?

Perhaps the days seemed happier at the time than they do in retrospect, but there seems sometimes a deep sadness in thinking of those who would once have gathered here on a Saturday evening. Perhaps the picture is too much coloured by William Trevor’s ‘Ballroom of Romance’, but the imagined cast of those who would have lined the walls as the band played waltzes seems to include many lonely and unfulfilled lives.

Men always seem lonelier. Big fellows with shirt collars that would barely button and suits that served for dancing on Saturday and praying on Sunday, shuffling embarrassedly as more worldly companions passed comment on the young women of the parish; what did they really feel like on the inside?

Meeting such men, years after their youthful hours spent standing in the corner of the hall, or with lit cigarettes in the cold darkness outside, discussing the prices at the mart, there is sometimes the thought that things might have been different, that life had not needed to turn out the way it did; but, then, such objections might be applied to all of us.

What had the women made of such occasions? Was future happiness about family alliances that ensured the combinations of farms of land? Were potential husbands graded on whether they arrived in black Ford motor cars or, like the man in the main street, on old black bicycles? (Being someone who would have arrived on two wheels, I always suspected the world worked in such a way).

Closing the eyes, the sound of voices, and a double bass and drums, and the chink of crockery, and laughter at the doorway, and tyres on gravel, seem easy to imagine. On a November’s night with the work done for the day and the quietness of Sunday to follow, the dance hall must have been an attractive place, an escape from the workaday existence in which nothing happened.

There is a thought that times present are much preferable to times past; but maybe every generation feels that way. Maybe the cyclist is glad to be passing down the street in 2013 and not in times when his pockets might contain no more than a couple of shillings and the future seemed a fearful country where emigration was the only way out and the letter from home the only communication.