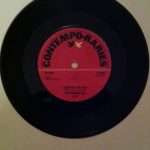 It is hard to remember The Shangri-Las Leader of the Pack being played since leaving secondary school in 1977 at the age of sixteen. A copy of a 1976 pressing of the single, its third release in eleven years, was among records I had bought during the preceding years, but to have admitted owning it among friends at sixth-form college or university would have prompted hoots of laughter.

It was strange, then, to hear The Shangri-Las twice today: Leader of the Pack being played by Jim O’Neill on his Today FM Gold programme, and I Can Never Go Home Anymore being played by Philip King on his RTE programme The South Wind Blows. The latter song had a depth and strength absent from Leader of the Pack, telling of the alienation of a teenage girl from her mother. Philip King described it as “definitely city music”.

The separation and anonymity offered by urban life would have provided a context for an imagined teenager who felt she could no longer return home, but is there more to “city music” than merely music from an urban context which lacks structure or convention?

Asked about “country music”, most people would identify with music inspired by the rural United States (there are country singers in Ireland who wear cowboy hats and boots). Love it or loathe it, (and it does seem to produce diametrically opposed reactions), country music has a distinctive sound. Tune into a country music programme and the first few bars are likely to give a fair indication of what the rest of the programme will be like.

What of “city music”? Are there bands that identify themselves as explicitly, or even exclusively, urban? If there are instruments used in country music that provide a distinctive sound, that give the music an identifiable country character, are there, similarly, instruments that are discernibly city in tone?

If the distinction rests not on instruments, but on style, then what style is city music? If The Shangri-Las are city, that would rule out the thought of city being a genre of rock music. If city music embraces bands ranging from a 1960s girl group to punk groups, then its distinctiveness cannot rest on its style.

Perhaps it is a matter of theme, of subject matter, of the content of the lyrics, perhaps there are songs that are unmistakeably urban, songs that could not have arisen in a rural context. Yet even then, it is hard to imagine many themes that are exclusively city in nature.

Commenting upon I Can Never Go Home Anymore, Philip King explained it themes but did not explain why such themes were necessarily city.

Perhaps I shall have to wait until The Shangri-Las are again played twice in a day before discovering answers to my questions.