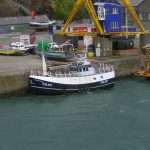 Flying from Liverpool Airport earlier this month, a man, with an unmistakeable Liverpool accent, travelling with his wife and daughter, stood in front of me in the queue for the security check. It was painful to watch as he was singled out for questioning, each of his belongings being taken from his bag and scrutinised. Eventually, he was allowed to proceed; he remained considerably calmer than I might have done. Why was he picked out? Does having a shaved head make one an international terrorist?

The inscrutable logic of those charged with the security of the nation is not a new development, it stretches back at least a generation.

In 2005, we encountered it at Fishguard in Wales. The port of Fishguard is not much more than a small seaside village. It appears on the map because it is the landing point for the Stena Line ferries from the Irish port of Rosslare. Rosslare, like Fishguard, is hardly the most significant of places.

The ferry crossing is very seasonal – in the winter months a couple of crossings a day, in the summer a much higher frequency because of the holiday makers travelling in both directions. Neither port would strike one as being particularly international, although Rosslare does get a ferry in from France as well as from south Wales.

Travelling into Fishguard one Sunday evening, the ferry was late and then there was a huge queue to leave the port. This seemed inexplicable, it could not be the volume of traffic; the boat was a small fast ferry and was only half full. As we reached the exit area, the reason became clear. Every single car was being stopped and its occupants being questioned by police officers wearing baseball caps and carrying all sorts of attachments on their belts. We were asked for photographic identification and handed our passports to the officer. He went through the passports page by page; I was waiting for questions about the visa stamps, but he seemed content, asked us about our holiday and sent us on our way.The prospect of catching a terrorist in Fishguard on a summer Sunday evening seemed so small as to make the whole experience seem laughable.

Preaching at a harvest festival service last night, I recounted seeing hay being cut with a scythe in a mountainous area of Spain in 1988, and then remembered our journey there. Sailing from Plymouth to Santander in northern Spain, we were pulled aside by the police at the Devon ferry port; we were made to step out of the car, our passports were examined, the boot of our car was searched, we were required to give an account of every moment since we had left our home in Northern Ireland. It did not seem to occur to the police officers that Protestant clergy were unlikely recruits for terrorist organizations.

Perhaps each of the checks were part of a process intended to give the appearance of “randomness”; their effect on each occasion was to alienate us from those who professed to protect us.