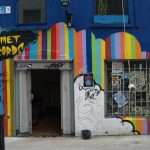 “Two from The Pretenders”, said John Creedon. “Kid” was followed by “Brass in Pocket”.

“Brass in pocket” was on a Pretenders album I bought in Oxford Street in January 1980. A fellow student had suggested the shopping expedition on a Wednesday afternoon when there were no lectures; university life premised upon the assumption that public school routines would be familiar to students and that Wednesday afternoon and Saturday afternoon would be set aside for sports. He being the authoritative voice on every aspect of student life, from how one should dress to which music was acceptable listening, we set off for the Virgin Megastore, the very first one, which had opened some months previously. The authoritative voice had to concede to others in our company that Virgin was not always the best value and we went to a basement store called “Simon’s Records”, or something similar. The Pretenders’ record was bought along with one by Blue Oyster Cult, a band whom I saw live in 1981 and whose album has long since disappeared.

The abiding memory of that long ago midweek shopping trip is not the details of the purchase, but the visit to the megastore; for teenage music fans, it was a visit to a shrine. The Virgin Megastore was the ultimate place to be if one delighted in browsing racks of records, examining sleeve details, and listening to the eclectic musical selection of the shop staff.

The megastore might have been the ultimate place to be, the Wembley Stadium of recorded music, but just as there were ordinary football grounds around the country where matches might be enjoyed, so there could hardly have been a town in the country where there was not a record shop. The selection available in the provincial shops might not have been as extensive, the clientele might not have been as diverse, the music played not just as esoteric, but a record shop was always a good place pass half an hour.

There are record shops that linger on, but now their stock is likely to have more by way of back catalogues and second hand discs than current releases. Customers tend to have a much higher age profile than they did in 1980. The music is likely to appeal more to greying hairs and receding hairlines than to nineteen year olds. The infinite access and unbeatable prices offered online have made keeping a record shop a hard-earned living.

In gaining a whole world of music, we have lost something of our soul. Clicking an icon on a computer screen to download a recording has not the tactile, visual or emotional quality of perusing an album cover, reading the sleeve notes, and walking to a counter where an assistant might discuss both the record and the band.