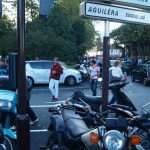 Sud-Ouest, the French regional newspaper, reports that between 15,000 and 30,000 demonstrators gathered in the Breton town of Quimper to protest against the “eco-taxe”, leaders wore the red bonnet of the French revolution. The tax is  per kilometre charge on Heavy Goods Vehicles and is levied for travel on some 15,000 kilometres of French roads. All lorries, regardless of nationality, travelling through France, must have a GPS tracking system to facilitate the charging.

The idea is not new. Germany has been tolling HGVs through satellite tracking since 2005; that same year the British government proposed the tolling of all vehicles through use of the GPS system.  The suggestion was that road taxes and fuel duties would be replaced by a straightforward tolling system; Alistair Darling, the then transport secretary even tried to suggest that it was for people’s own good, that the country would descend into gridlock unless such proposals were implemented.

If the French government finds its “eco-taxe” an easy source of revenue, it is hard to imagine that it will not be expanded, that other classes of vehicles will not be included and that other European countries will not enthusiastically implement such schemes. It will, of course, be presented as being for our benefit, that ecological and traffic pressures are such taht we must be charged money to save us from ourselves.

But there are more serious issues raised; no government will be able to resist the temptation to use the data for various purposes. If you are at point A at 7.00 and at point B at 7.10 and the distance is six miles through a 30 mph zone, well, you have been speeding. If a crime is committed at point C when you are passing down the street, well, you must be considered as a suspect. If your car regularly appears in the car park of the local pub and then moves to the home address at around 11 pm, then the local police will be waiting for you one evening. Data could have great commercial value, even being sold to divorce lawyers. ‘Mr. Smith, why did you say you were at the office when traffic records clearly show that your car was parked outside number 39 Seedy Street?’

An “eco-taxe” could very quickly move from being a source of revenue to being a subtle, or not so subtle, form of control. Be afraid.