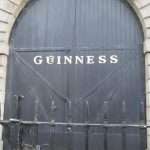 A long day, rounded off by a tortuous two and a half hour meeting, perhaps being tired and fractious, it might have been something imagined, but I was sure that the pub had a sign saying, “late night restaurant”. There was no inclination to turn back to check: why would a pub miles out of the town have a late night restaurant? Perhaps it had been a bona fide.

College days are a now distant memory, but one memory remains of a Munsterman who had a fondness for transporting us from Churchtown up to Lamb Doyle’s pub at the edge of the Dublin mountains. It seemed an odd thing to do, there were numerous pubs within easy walking distance for someone looking for refreshment after a day at the books. No-one ever really explained the purpose of the journeying. Lamb Doyle’s, I was told, was bona fide. It was an odd way of talking about a pub, I thought.

Only in recent years did I discover that “bona fide” meant something altogether different from simple good faith. Scholars of James Joyce would have fully understood why the Munsterman drove up from Churchtown

“In Ireland until very recently the public houses and ordinary drinking places closed nightly, by law, at hours varying between 10:30 and 11:30 p.m. The ordinary hapless drinker was then required to go home, if his home was easily attainable. But the law took account of the unhappy wanderer far from home at the dread hour, and certain establishments were licensed to cater to genuine travellers—bona fide travellers—for extended periods after closing time. Such houses were known as bona fide houses, and were highly regarded by the drinking fraternity, who were readily transformed into bona fide travellers, since the stipulation of the law, drawn up in days of pedestrian or horse-borne transportation, was that a bona fide traveller was anyone who at closing time had put a distance of at least five miles between himself and the spot where he had slept the previous night. In the sizeable city of Dublin, well furnished with public and private transportation, it became no trick at all for respectable citizens to drink at night in suburban pubs five miles on more from the beds in which they had spent the previous night and would also spend the ensuing night, when the charms of bonafide drinking palled”.

The days of driving a motor car brought an end to the days of bona fides. Perhaps they will become as a distant part of the past as the day of James Joyce.