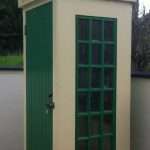 BBC Radio 4 Extra’s celebration of the 50th anniversary of Doctor Who included interviews with those who had read the novelised form of the stories in the 1960s. One man recounted that the novels would normally be published on a monthly basis, but that, on one occasion, two were published together. “I stood looking at them on the shelves of W.H. Smith. It was the first time I met another Doctor Who fan; a girl was also standing there looking at the books”.

There was no clue as to how the conversation proceeded. “You like Doctor Who? So do I”. Maybe there was no more said.

In an age of social media and digital communication, a friendship is easy to sustain, but in days when one went to Smith’s to buy novels derived from television programmes, what did one do? Had the fellow Doctor Who fan been attractive, and had there been a wish to further the conversation, what options were there?

Telephones were hardly plentiful and, anyway, calls were so expensive that even one had the opportunity to discuss the relative evils of the Daleks and the cybermen, parents would hardly have allowed it. Not that telephones were of the sort that allowed one to sit on the stairs and chat at ease; a big Bakelite device on a shelf or sideboard declared itself to be about serious matters. Even if the fellow Doctor Who fan had been inclined to discussion, and had lived in a house where there was a telephone, and had been happy to disclose the number, what would have happened if one had phoned her? Almost certainly, her parents would have answered the call, and given short shrift to the idea that one had called to talk about Doctor Who.

If not a telephone call, then how else could one communicate? Would anyone have given their address to someone they met at the bookshelves in Smith’s? People used to play games of chess by post; maybe it would not have seemed so outlandish to have asked an address so as to discuss Doctor Who via the Royal Mail.

Five decades on, it is hard to remember how difficult was the sort of informal communication we now take for granted. Days when people went down to W.H. Smith on a Saturday in anticipation of the latest edition might now only be reached if one had a Tardis.

Of course, despite the abundance of communication channels now available, the conversation would never now take place: novels published once a month are a thing of the distant past, for who is there now who would read them? 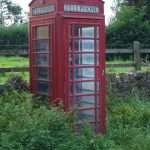