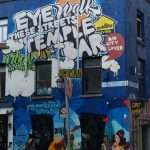 John Creedon invited listeners’ suggestions concerning the song they associate with their first night away from home, wherever it might have been, a student bedsit, a nurses’ home, a portacabin on a building site, wherever. Pondering his invitation, it was not hard to resist the temptation to text the programme – Ken Boothe’s “Everything I own” from the autumn of 1974 was hardly likely to feature on the programme playlist.

“Everything I own” seemed always an odd sort of song, even to the ears of a fourteen year old away from home for the first time, it didn’t seem the love song it was presented to be. If this was a song about a former lover, then the first verse just did not sound right:

You sheltered me from harm
Kept me warm, kept me warm
You gave my life to me
Set me free, set me free
The finest years I ever knew
Was all the years I had with you.

Sheltered from harm? Kept warm? Given life? It didn’t exactly sound the stuff of romance, not that there was long to ponder the matter, there were another twenty-nine songs in the Top Thirty and Ken Boothe was soon replaced at No 1 by David Essex.

Only this year were the suspicions of a fourteen year old confirmed; “Everything I own” was not about the loss of a lover, it was written by David Gates as a tribute to his own father, who had died. The lyrics, “You may lose them one day, someone take them away”, were not about a girlfriend who had turned to someone else; they were about death and the pain of loss.

Looking back now, one wonders how Lou Reed’s “Take a Walk on the Wild Side” was given mainstream airplay when artists like Donna Summer could find themselves banned. To the worldly wise, Reed was comprehensible, other songs were less so. Sometimes context provided the necessary meaning, tracks from The Who’s “Tommy” could be understood when the musical or the film had been seen; Don McLean’s “Vincent” became clear when someone explained it was about van Gogh. But there were records that seem as opaque now as they did forty years ago – among the Procul Harum’s “Whiter Shade of Pale”, the various interpretations on the Internet still not providing a full transparency to the lyrics.

Perhaps John Creedon would invite suggestions for songs people don’t understand; I might text him a lengthy list.