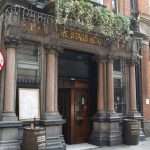 It took a couple of hours to complete the return for the church census, something that will tell us what we already know, that teens and twenties are conspicuous by their absence. On a December night, five years ago, I reached the conclusion that if  I were a teen or a twenty, I wouldn’t go to church.

Dashing for a late train south from the city centre, I had found myself in a carriage where a group of shaggy haircuts were singing very loudly.  It was the end of the university term and one assumes that the occasion had been marked with celebratory drinks.  The music from the CD player inspired bursts of song, it being obvious that, after the first verse, the shaggy ones knew only the refrains.

Merry, but unthreatening, they filled the railway carriage with sound that, if not tuneful, did not worry the other late night travellers.  A little girl and her father boarded the train at a suburban station. She looked to her father for reassurance. “They’re no trouble”, he said.

The shaggy haircuts had been so caught up with one song, they had missed their station.  The obvious remedy was to get off at any of the following stations, cross the bridge to the other platform and wait for the next northbound train.

Perhaps wishing to hold on to the moment, one of them took out a timetable and announced that if they stayed on the southbound train until the end of the line, it would be bound to form a northbound train that would take them to their destination.  They concurred with his opinion and continued their singing.

Returning from a youth event in the cathedral, the shaggy haircuts had prompted reflection.  Four eighteen-nineteen year old males singing along after end of term drinks, where would they find a place in our church’s scheme of things?

With those who have brought faith down to a matter of personal salvation; sign on the dotted line, do Christian things with Christian people, don’t drink and don’t listen to musicians who are not Christians?

With those who don’t really believe in anything anyway, except not saying anything nasty about anyone, except white, male Protestants, who are personally responsible for all the world’s ills?

With those in the traditional, middle of the road who would not even notice the shaggy haircuts, because they are busy getting ready for the Christmas sale?

Were I eighteen again, would I be likely to be a churchgoer, or would I be more at home on late train, singing along with my mates?

It didn’t take long to come to an answer.

The census just confirms that things haven’t changed since that December night five years ago.