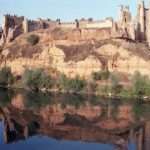 Looking through old photographs can mean meeting strangers, not unknown people, not other people, but oneself as an unrecognizable character in a past that is another country.

Michael Portillo’s BBC television railway journey from Bordeaux to Bilbao covered territory familiar from numerous family holidays, but for him the sun shone unceasingly. On a summer holiday twenty-five years ago, a guide book took us through the landscape of Portillo’s journeying, the sun shone for us in Biarritz and in San Sebastian and in the little town of Mutriku, but somewhere along the coast it broke and it became apparent how the coast could be so green.

Travelling from the Basque Country, into Cantabria and then Asturias, we turned south in a search for sunshine and a campsite. The journey ended at a small town in León, Valencia de Don Juan. In the midst of vast open red soiled countryside, the town seemed an oasis, its campsite an island of green, trees, grass, a swimming pool.

Speaking no Spanish whatsoever, we spent a week in the town; shopping for food each day, buying ice creams on evening walks, reading novels and watching the daily life of the community. Going to church on Sunday morning, the choice of attending a Mass at 12.30, was a mistake; it was not a quiet occasion with worshippers dotted around the cool darkness of the medieval church, but the main event of the day with every pew filled. It was a place where there were women wearing mantillas and waving fans with a gentle elegance and men whose faces told a story of lives lived in the Castilian sun. Having to sit halfway up the nave and not knowing what was being said did not create nearly as much a sense of being conspicuous as a complexion that was wan beside those all around.

What is odd about those Spanish August days a quarter of a century ago is that they seem inhabited by someone else. It seems unthinkable now to travel without plans, without maps, without any capacity for language other than a pocket Berlitz phrase book which allowed one to ask questions but, obviously, could not translate the answers. It seems hard to think we once travelled with no fixed point other than a ferry port that needed to be reached three weeks hence. Used now to having a mobile phone that works in rural Rwanda and to finding Wifi in the Burundian capital Bujumbura, the thought of a telephone box in a Spanish town being the only means of communication with home, seems odd: what if something had happened? How would anyone have contacted us? To journey in such a way seems out of character in a life lived with caution and conservatism.