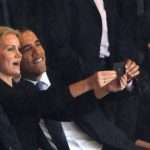 Why would three premiers take a smartphone picture of themselves together? Who is there to see such a picture? How many million images already exist of them? Did they plan to post the picture on their Facebook pages? Or perhaps show their friends at work? Or text it to their mates: ‘Look who I’m with’?

Why would the Prime Ministers of the United Kingdom and Denmark and the president of the United States even think about taking such a picture at a solemn public occasion with the eyes of the world upon them?

There is a story from Greek mythology which seems apt in such circumstances.

Narcissus was a handsome young man who arrogantly shunned all the girls who approached him. One girl in particular tried to attract his attention, but, try as she might, he ignored her. She prayed to a goddess that Narcissus would return her love, but her prayers did not work, so, in desperation, she prayed Narcissus would learn what it was like to love someone without the return of that love. The goddess heard her prayers and granted her wish.

In the forest where he lived, there was a quiet fountain and one day Narcissus went there to drink. He was surprised by a lovely sight, a beautiful image in the clear pool. It was his own reflection, but Narcissus thought it was some handsome spirit peering from the fountain.

Narcissus had never seen such a lovely creature; he immediately fell in love with himself. He moved closer to try to embrace the image, yet every time he tried to grab it, it fled away. Narcissus was so captivated that he could not bring himself to leave the pool, and he lost all desire for food and drink.

Narcissus began to talk to the image. Why did it try to escape him? Everyone else in the forest thought he was very beautiful. He remained at the pool, pining away over the image and his health and beauty faded away. Finally, he died staring at the image in the fountain, striving to embrace his one object of desire: himself.

What was today’s photograph other than an odd piece of narcissism? It was hardly about having a souvenir; hardly about having some memento of the occasion. When every international news agency, every world television channel, every newspaper syndicate, every magazine paparazzo, has taken one’s photograph, who is there left to do so except oneself?

Like Narcissus staring into the pool, they can look at themselves.