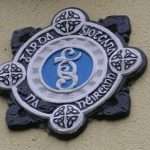 “There was a squad car outside the barracks yesterday”.

“There was, but they are hardly to be seen most of the time, maybe things will change now”.

News reports of a resumption of Garda recruitment after a five year freeze brings expectation of a change in the situation. The ranks might be filled with enthusiastic young recruits, the Guards of the coming decades may differ from those of the 1980s, or the 1950s.

A friend recalls a holiday in the 80s. “We went up to Donegal on holiday; it would be a good few years ago now. Anyway, I set out for a drive one day and not knowing where I was, found myself across the border. I was in the Six Counties, I had crossed the border from Donegal to Londonderry”.

(It was odd hearing the Republican term for Northern Ireland, the ‘Six Counties’ in the same sentence as ‘Londonderry’, the Unionist name for Co Derry).

“I drove a few miles and saw people working up on a bog, cutting turf with slanes. Cutting turf by hand was hard work and skilled work and I stopped and walked up to them for a chat.

“Anyway, I went on from there and found myself back in the Twenty-Six Counties and I think I must have passed down the opposite side of the same bog. There were three Garda cars parked up on the roadside and the boys were up at the turf. I stopped to watch them and one of them came down to ask if there was something I wanted”.

“I was just watching. I come from a place where a lot of turf is cut”.

“‘I do’, I told him, and we stood and talked for a while. He said a group of them rented a piece of bog and cut turf each year”.

It seemed a remarkable memory, perhaps from the days when Garda squad cars were dark blue; it would hard to imagine anyone would risk parking up three of today’s brightly coloured patrol vehicles and not expect to attract attention.

It seemed an incident worthy of the 1950s life of Sergeant Reegan in John McGahern’s novel The Barracks. Reegan is disillusioned with his police life, his desire is for the rural ways, working the land, making a living from his own labours. Reegan digs his potato patch in Garda time, his only anxiety that of being caught. Sergeant Reegan would have felt at home wielding a slane amongst the company of colleagues. Had he lived in the times of squad cars, perhaps his enterprises would have been more extensive, perhaps the potatoes would have been carried in the boot.

Gardai renting a section of bog and engaging in the hard physical labour of cutting it; McGahern’s character’s desire to give up the police work and return to the land; each seemed to point to a deep longing for the recovery of something in the past that gave them more contentment. Whatever the new generation of Gardai experience, it is hard to imagine them being drawn to digging potatoes or cutting with a slane.