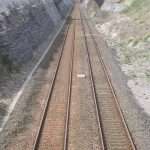 Seamus Heaney’s collection of poems District and Circle was a favourite Christmas present in recent years. “Polish Sleepers” one of the poems it contains never fails to evoke childhood memories.

Wooden sleepers that had once formed part of the permanent way of the railway had been taken up and lain redundant until being used for the landscaping of a garden. The scent of creosote and blistered tar bring memories of lying in the silence of a Ulster night waiting for the rattle of a train. The memories will remain forever in the deep past as the railway is closed and dismantled and the place where it had once been is claimed by decay and overgrowth.

Once they’d been block-built criss-cross and four-squared,
We lived with them and breathed pure creosote
Until they were laid and landscaped in a kerb,
A moulded verge, half-skirting, half-stockade,
Soon fringed with hardy ground-cover and grass.
But as that bulwark bleached in sun and rain
And the washed gravel pathway showed no stain,
Under its parched riverbed
Flinch and crunch I imagined tarry pus
Accruing, bearing forward to the garden
Wafts of what conspired when I’d lie
Listening for the goods from Castledawson…
Each languid, clanking waggon,
And afterwards, rust, thistles, silence, sky.

The tarry pus and the thistles evoked an afternoon in the late 1960s and a disused line in south Somerset. My uncle’s white Bedford van was reversed towards what remained of the railway halt; the back doors were open and flag stones from the platform were loaded into the back. A book I have says the station must have been Thorney Halt; wherever, it seemed like the end of a world. Taking the stones from the platform would mean that the trains would never run again; that something was gone forever from life and history.

One evening in March 2007, I pulled a hire car up on the verge of a little hamlet called Upton to search for signs of another halt. The railway was still open, but the last vestiges of what had been Long Sutton and Pitney station seemed to have long since disappeared. Staring into the gloom of the early spring night, it seemed that a past was gone from sight.

Heaney’s memories come with a shadow. “Sleepers” would have been a sufficient title for the poem; instead it is entitled “Polish Sleepers”. There is, in the reminiscence of trains through the benign countryside of Co Derry, the allusion to trains in another time and another place; the thought of railway waggons rolling through the wide skied Polish landscape towards the terminus of Hell.

Even without the “Polish” reference, there would perhaps be a sadness in Heaney’s words. Even the waggons have become languid; the world to which they belonged has lost its vibrancy, its moment is past and gone.

In forty years’ time, what will be the artefacts of the early-21st Century? What sounds will be recalled? Where will people stand and screw up their eyes trying to see back through the years? No sleepers and no flagstones, what will there be to take up and reuse?