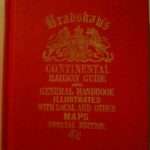 On a bright winter’s day three years ago, lunch was taken in a small restaurant on an Austrian mountainside. There was a comical moment when a slightly eccentric Englishman opened his wallet to reveal an array of notes, none of which looked anything like Euro.

Wishing to spare him embarrassment, I leant forward and asked him. “What currency are you planning to pay for your lunch with?”

“What have I here?” he said, taking the currency from his wallet and looking at it, ” Swiss francs”. He seemed unperturbed by this thought.

The cost of his frugal lunch was easily paid. “What currency are you bringing tomorrow?” I smiled. “What other banknotes have you left, maybe some zloty?”

“I thought I’d bring some groats”.

We laughed: a groat would probably cover the cost of more than lunch.

Reading the facsimile edition of “Bradshaw’s Continental Railway Guide” for 1913 that was among yesterday’s Christmas presents, I realised that had the conversation taken place a century earlier, the man’s Swiss francs would have had a much wider circulation.

On page lxx of the continental edition of Bradshaw, there is “A Concise Table of Foreign Moneys”. France, Italy Belgium and Switzerland each have the Franc as their currency, and while Greece has the drachma, the Franc is readily acceptable. A note to the table says,

“In France, Belgium, Switzerland, Italy, and Greece, 5 franc pieces are legal tender in each country, irrespective of their country of origin. Smaller Italian coins only pass in their own country; French, Belgian and Swiss small silver coins pass indiscriminately, but not the copper or nickel centimes”.

Nine decades before the Euro, there was a common currency in wide circulation in a Europe where borders were more open than they would be for the next eighty years. Pages lxvi-lxvii of Bradshaw have “Regulations respecting Passports”. Denmark, Iceland, Greece, Noway and Sweden have “No Regulations in force”. The notes on Austria and Hungary and the Netherlands say Passports are not legally necessary. In France, “the possession of a Passport may save inconvenience” and in the German Empire “the possession of a Passport is not obligatory”.

In 1913, a single Europe seemed a possibility without the accumulation of bureaucracy and regulation that has accompanied the development of the European Union, the drawback of travel in those times being the customs duties imposed at every border, duty free goods being no more than those that might be used in the course of a railway journey.

Had the catastrophe that befell Europe the following year not occurred, we might have reached where we are at a much earlier date, and might have done so without commissions, councils and parliaments.