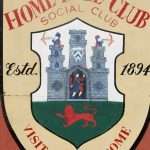 The radio station played Alice Cooper’s “School’s Out”; it seemed and odd selection on 28th December. The car thermometer showed two degrees and the line of traffic moved along at a steady 120 kmh. The Curragh approached. On a moonless night, darkness filled the openness between the motorway and the racecourse on one side and the barracks on the other. The imagination could fill the spaces.

A handful of lights shone from the army buildings. A hundred years ago, they would have been occupied by British soldiers, it was the main British base on the island of Ireland. The Liberal government in London was trying to make progress with provisions for Irish Home Rule, but, in the North, unionist politicians were determined to block its progress. The Ulster Volunteers had been formed as a paramilitary resistance to the imposition of Home Rule. On 20th March 1914, a group of officers at the Curragh engaged in a virtual mutiny, they said they would resign rather than lead their men in any action against the Ulstermen. A constitutional political process was obstructed by political action on the part of the soldiers. Ireland may have been very different had the mutiny not taken place.

On the racecourse, the grandstand and the other buildings were no more than outlines in the gloom. On such a chill night, it was hard to imagine the massed cheering crowds and the thunder of horses’ hooves as the Irish Derby is run. There seems no animal more beautiful than a horse in full flight and flat racing brings none of the horror of steeplechasing.

One wonders if the Curragh were in any other country, whether a motorway would have been built through the middle of it. Would such a place of open heathland have been the location of one the country’s main arterial routes?

Through the night, the lights of a train shone, one of those diesel multiple units rather than a real train with a great locomotive drawing it. It seemed a prosaic thing in such a place, but the Curragh could never be prosaic; it will always be a place of galloping horses, a place that echoes with history, a place that inspires song, as Christy Moore puts it:

The winter it has passed
And the summer’s come at last
The small birds are singing in the trees
And their little hearts are glad
Ah, but mine is very sad
Since my true love is far away from me

And straight I will repair
To the Curragh of Kildare
For it’s there I’ll finds tidings of my dear.

Of course, playing The Curragh of Kildare on a December night would be as silly as playing Alice Cooper.