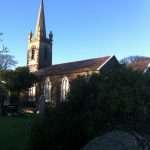 25th December 1993. After church, a visit to the local hospital where two parishioners had been kept in over Christmas. Willie was his usual irascible self, sat in bed, surveying the ward. His health seemed to present no cause for concern. Three o’clock that afternoon, the Rectory telephone rang, not something expected on Christmas afternoon.

“Mr Poulton, this is the staff nurse in Mr Taylor’s ward, you were in with him this morning. I’m sorry to say that Mr Taylor has just died”.

“But, he was fine this morning”.

“He was, it was very sudden. I wanted to ask you about his sister. I know he lived with her. Would you be able to call with her to break the news? If it’s not convenient, I can ask the police to call”.

Arriving at her door, no words were necessary. “Oh no, something has happened to Willie. He has died, hasn’t he?”Well past eighty years of age, her seventy eight year old brother had been her only companion.

Ordinarily, the funeral would have been on the third day, but his sister had a son in Australia, who had left Ireland years before when work was scarce. He was the only family left and wanted to come home to be with his mother. The funeral was fixed for 30th December.

This night twenty years ago, I sat and wrote a sermon for the funeral. It was a moment of relief after the deep sadness of the day.

The family who grieved on 29th December was one of the kindest and the best you could ever hope to meet, anywhere.

They were farming people with names being passed down through the generations. There was David, known as Davey, and his son, David, who was called Dee, and naturally the grandson on the farm would have been David as well, except there were four granddaughters, so when the first great grandson was born, he was David. When he was eighteen months old he fell suddenly and broke a leg, it seemed a strange occurrence. Two months later he started showing signs of losing his balance. He was taken for tests which showed an inoperable brain tumour. He died, at home, in the arms of his parents, at the age of 21 months—the last time I saw him was on the night of 26th December 1993. Standing at his graveside on December 29th remains one of the saddest moments of my life.

Twenty years on, and young David’s memory has not faded.