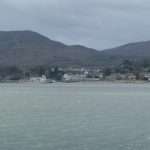 “The sun always shines on TV,” went the lyrics of a pop song thirty years ago. The words seemed close enough to the mark. On the handful of television channels we had in those years, the programmes seemed mostly from worlds filled with excitement and interest. Of course, there was Coronation Street and Brookside, but even those worlds were exotic compared with life in a small village.

Television was never about dull things, the soaps were filled with family dramas and unexpected events, plots never featured hours spent doing boring jobs, or pushing a trolley up and down the aisles of Tesco.

Of course, television changed, ordinary life became the ordinary stuff of television, though the connection between “reality” television and actual reality seems, at times, tenuous. Yet even the most ordinary of things of television life still seem imbued with an excitement and variety not to be found in most streets.

Heading northward, with cloud lying like a blanket over the mountains of the Cooley peninsula and Slieve Gullion entirely shrouded in greyness, the landscape had the quality of a black and white television drama, perhaps one set in Sweden, where the pauses in dialogue are long and where one relies on subtitles for clues as to what is happening. The windscreen wipers laboured as squalls off the Irish Sea threw bursts of water at the car. The placing of flowers at family graves would be a wet experience.

Passing through Newry and turning along the shore road, Carlingford Lough was a deep slate colour, trimmed with white in places where waves made landfall.

The sun might always have shone on television and, even now, the world of television might be hugely more interesting than the world of a middle aged cleric, but it seemed good that these places through which we were driving had become part of a routine and a predictable world.

At Narrow Water, there came memories of watching the evening television news on a sunny August bank holiday Monday in 1979. My family had been holidaying in North Devon and having spent the weekend with them, I had travelled homeward to return to a summer job. I had caught a bus from Barnstaple to Taunton in Somerset, and from there a local service to my grandparents’ farm. My grandmother sat and watched in silence: Lord Mountbatten and companions had been blown to pieces by an IRA bomb planted on their boat in Co Sligo, on Ireland’s west coast and, on this unassuming stretch of east coast road, eighteen soldiers had died in an IRA ambush. There was nothing one could say.

It would be another nineteen years before a final peace agreement, during which time hundreds and hundreds more people would die.

Greyness, dullness, routines, boredom, monotony; Ulster roads flooded with water draining from the hillsides above; walking through a graveyard on the slopes of Slieve Donard, as rain runs down inside the collar; feet wet from overflowing gutters; all of it infinitely preferable to the memories one might have of the past of these places.